During his sermon, Metropolitan Cleopas spoke about the restoration of the holy icons, which is commemorated by the Church on the Sunday of Orthodoxy

On February 25, 2018, the Sunday of Orthodoxy, Metropolitan Cleopas of Sweden and All Scandinavia presided over the Archieratical Divine Liturgy at the St. George Cathedral in Stockholm, assisted by the Cathedral’s parish priest V. Rev. Archimandrite Sosipatros Stefanoudis, the Archieratical Vicar of the Patriarchal Exarchate for Orthodox Parishes of Russian Tradition in Western Europe and parish priest of the Transfiguration of Christ Church in Stockholm Rev. Protopresbyter Angel Velitchkov, and the Holy Metropolis of Karpenision’s Archieratical Vicar of Agrea, Rev. Protopresbyter Evangelos Feggoulis, who was visiting from Greece. The head chanters of the Cathedral Mr. Dimitrios Kalpakidis and Dr. Andreas Selamsis, along with the members of the Cathedral’s Byzantine choir chanted the hymns of the day. 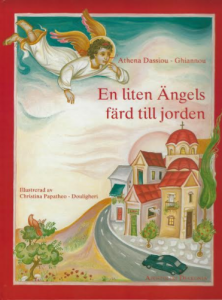 During his sermon, Metropolitan Cleopas spoke about the restoration of the holy icons, which is commemorated by the Church on the Sunday of Orthodoxy, and the need to restore humanity’s downtrodden existence and dignity, which have been adversely affected by modern iconoclastic trends, all forms of exploitation, misuse of authority, forced labor, forced recruitment and enlisting of citizens as fighters in armed conflicts, illegal trade of human organs, refugeeism, migration, forced panhandling, human trafficking, slavery, etc., most often resulting in the victimization of society’s most vulnerable social, children. In contrast to the aforementioned marred imaged of mankind, the pinnacle of God’s creation, the Church exalts every human being, who was created in the image and likeness of his Creator, God. It offers humanity the prospect of deification by grace and the realization of the reality of “the new man” and “new creation,” resulting in the restoration of man to his original state, prior to Adam’s Fall. 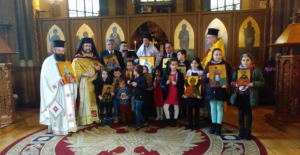 At the conclusion of the day’s services, Metropolitan Cleopas presented the Metropolis of Sweden’s inaugural publication – a children’s book written by Mrs. Athena Dasiou-Giannou entitled “The Story of a Little Angel,” which was printed by the Church of Greece’s publishing house Apostoliki Diakonia free of charge using the Swedish translation by Mrs. Elisabeth Styrlander. The Metropolitan expressed his deepest gratitude to the Director of Apostoliki Diakonia, His Grace Bishop Agathangelos of Phanarion, and his associates for this touching gesture towards the Ecumenical Throne’s missionary eparchy in Scandinavia. Metropolitan Cleopas offered the book as a gift to the 80 children who attended the presentation ceremony. 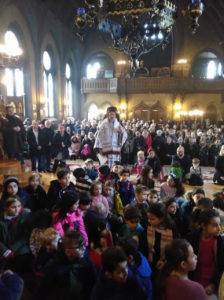 Immediately afterwards, the Youth Department of the Holy Metropolis offered food and sweets to the children in the Cathedral Reception Hall thanks to the coordination spearheaded by Messrs. Rafail Poumeyrau and Fredrik Styrlander, volunteer legal counselors to the Holy Metropolis. Meanwhile, the Ladies Philoptochos Society of the Cathedral, under the direction of its president Mrs. Fotini Batsela, offered lenten delicacies to the congregation. 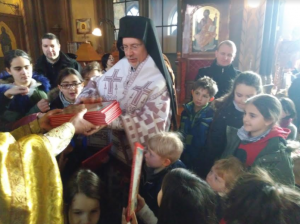 Their Excellencies the Ambassadors of Greece Mr. Demetrios Touloupas and Mr. Sotos Liasides of Cyprus were on hand for the Divine Liturgy, together with the Rev. Gunnar Lind and Ms. Cajsa Sandgren of the Lutheran Church of Sweden, who help coordinate the dialogue between the Eastern Orthodox and Oriental Churches and the Lutheran Church of Sweden.