Dr. George Patoulis is Mayor of the northern Athens district of Maroussi & also presides of Greece’s Central Union of Municipalities

His Eminence Metropolitan Cleopas of Sweden and All Scandinavia met with the Mayor of the northern Athens district of Maroussi, Dr. George Patoulis, who also presides of Greece’s Central Union of Municipalities, during the latter’s visit to Stockholm, welcoming him to the Metropolitan Cathedral of St. George.

Mayor Patoulis was accompanied on his trip by Mr. George Kontorinis, Deputy Speaker of the Municipal Council of the Municipality of Solna and President of the Hellenic Association of Elected Officials of Self-Governing Municipalities in Europe. Greece’s Ambassador to Sweden, His Excellency Dimitrios Touloupas, and Mrs. Kyriaki Papadopoulou-Samuelsen, a member of the Metropolis of Sweden Executive Board, were also invited by the Metropolitan to attend this meeting.

After welcoming Mayor Patoulis, Metropolitan Cleopas conveyed the blessings of His All Holiness Ecumenical Patriarch Bartholomew and gave him a tour of the cathedral, while also informing him about the history of the building and the efforts currently underway for its complete renovation and maintenance.

Following the tour, matters of join interest were discussed. Mayor Patoulis spoke of the close bond that he maintains with the Ecumenical Patriarchate and the ministry of the Holy Metropolis of Sweden, which he noted that he follows with particular interest. He also praised the dynamic presence of the Greek Community in Scandinavia, and highlighted the importance of maintaining the Greek language and the cultural heritage that it carries, as well as the colossal contribution of the Church towards this end. Speaking about the work of the Municipality of Maroussi, he noted the close collaboration it shares with the Church, which manifests itself through the co-organization of cultural and philanthropic events. In his capacity as President of the Athens Medical Association, he spoke about the close collaboration developed with the Holy Archdiocese of Athens and the joint efforts put forth to collect medicine and medical supplies to distribute to at-risk groups in society.

Metropolitan Cleopas spoke about the multi-dimensional ministry of the Holy Metropolis of Sweden and the irrefutable need for the local Hellenic Community to benefit from the sterling collaboration of all relevant institutions, including the Greek Embassy, local Greek Schools, Hellenic Associations, and various other official organizations. This pastoral concern manifests itself in his frequent visits to Greek Schools and by inviting children and young people to become more active in the life of the Church by attending events organized by the Metropolis and its parishes. He also noted that the active engagement of the youth supports the vision for the future of the local Orthodox Church.

The meeting was concluded with photos and the exchange of commemorative gifts.

Following the meeting, the Metropolitan hosted a luncheon in honor of Mayor Patoulis and the other guests at a restaurant in Stockholm. 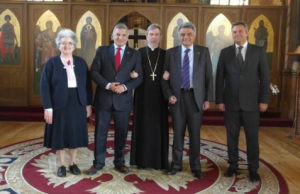 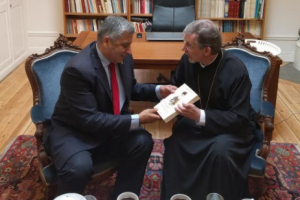 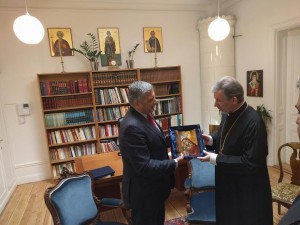 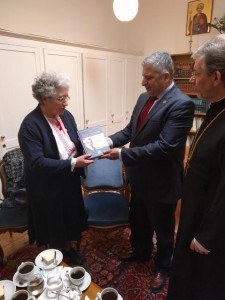 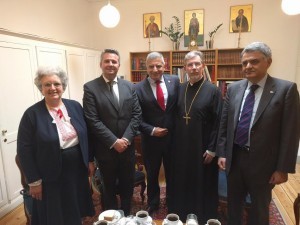 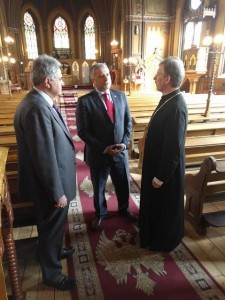 Tags With: Metropolitan Cleopas of SwedenPatoulisStockholmsweden