Mykonos, part of the Cyclades group in the Aegean, is the place that has launched a thousand postcards. Known as the isle of winds, it is famous for its trademark sugar-cube houses, amazing beaches and non-stop party atmosphere the island has something for everyone. 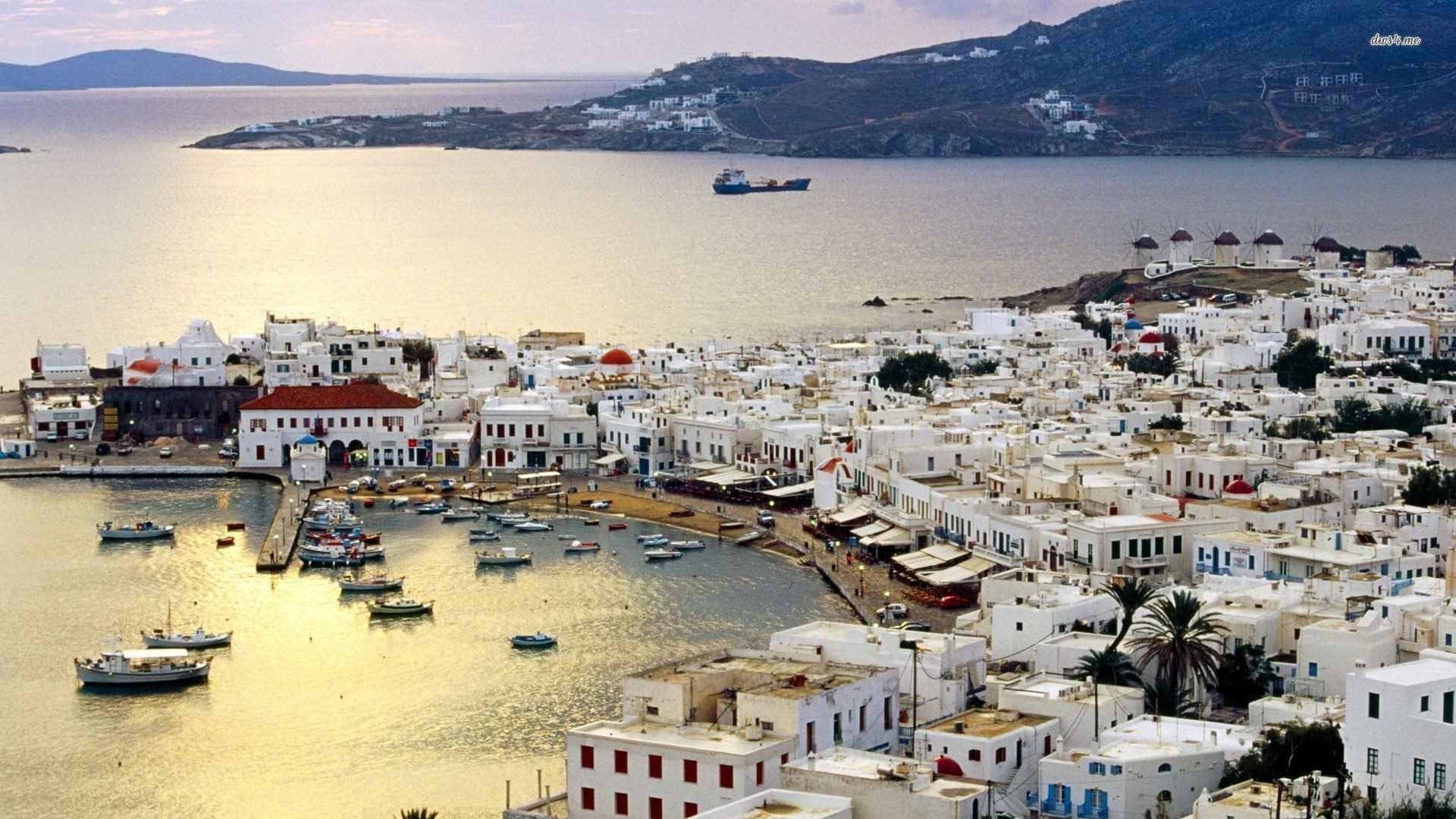 Named after Mykons, who was the son of god Apollo and a local hero. The island is also said to have been the location of a great battle between Zeus and the Titans where Hercules killed the invincible giants having lured them from the protection of Mount Olympus. It is even said that the large rocks all over the island are the petrified testicles of the giants.

In antiquity, Mykonos and nearby Delos were places of worship for Apollos and Artemis. 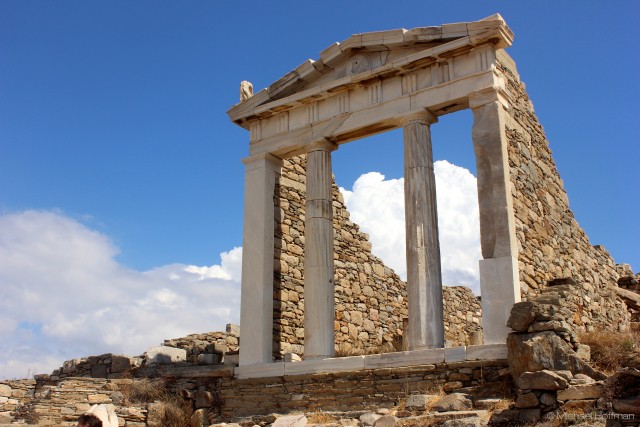 Little Venice is one of the most iconic areas of the island. Rows of fishing houses line the waterfront, the first constructed in the mid-18th century. Initially, rich merchants lived here as they had direct access to the sea. These days the ambience of the area attracts artists.

It’s not known as the isle of winds for nothing! The iconic Mykonos windmills can be seen from every point of the main village of Mykonos. Most face twoard the north where the island’s climate sources its strongest winds. Most of them were built by the Venetians. 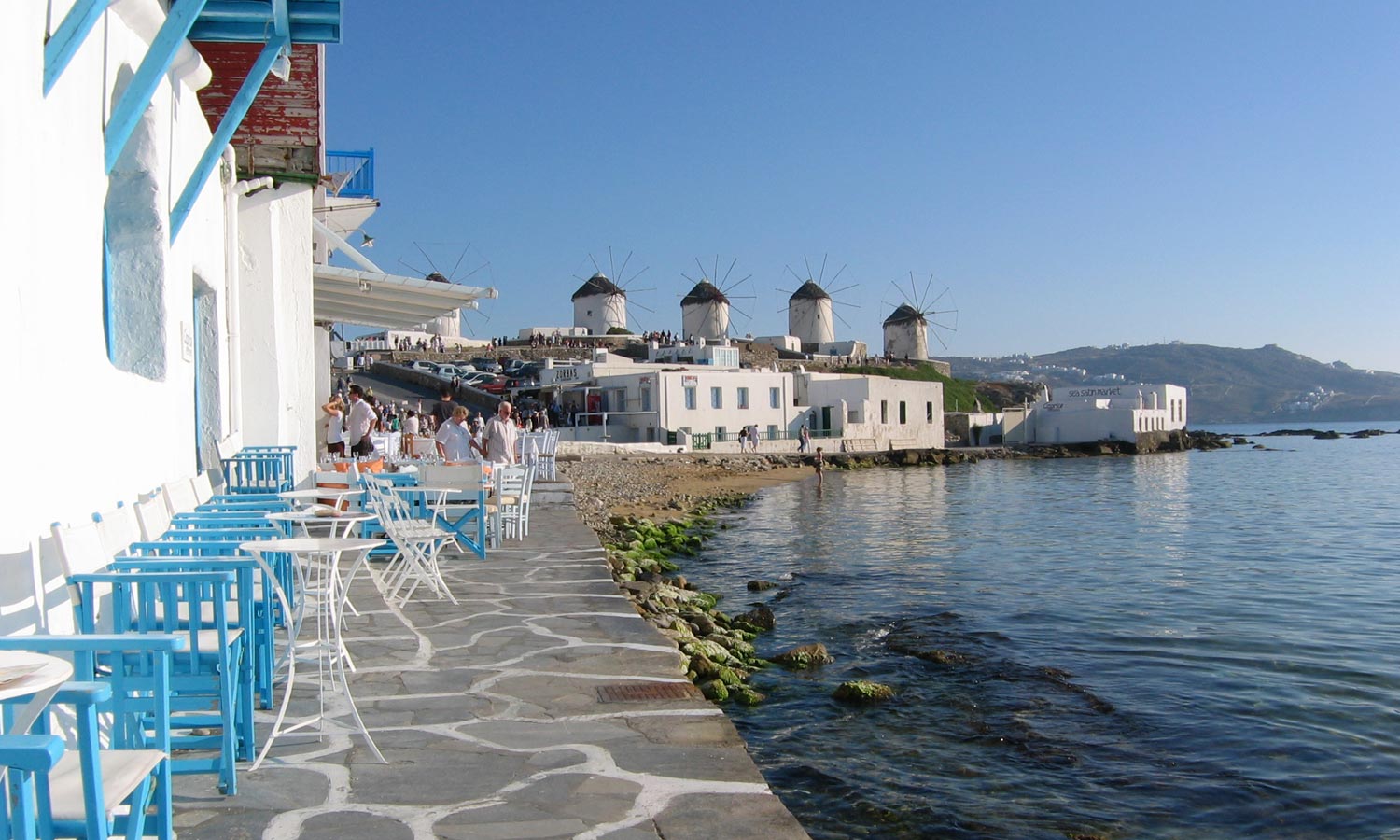 Armenistis lighthouse is testimony to the island’s maritime history and is fully functional. Located at Fanari, it is 6.5 km from Chora. 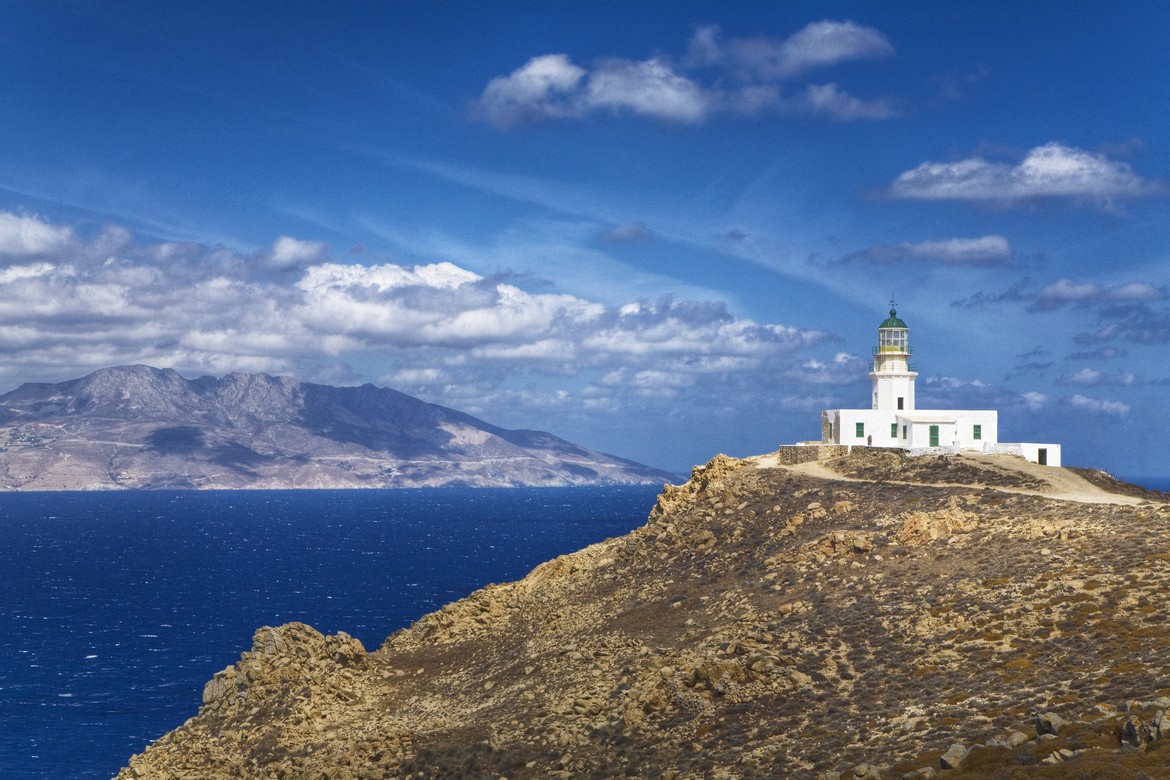 Every year, thousands of tourists and celebrities visit the sandy beaches of Mykonos, with their luxurious sunbeds and umbrellas. Psarrou is a cosmopolitan beach surrounded by fancy restaurants. Here’s a view of Psarrou from the famous Nammos beach club. 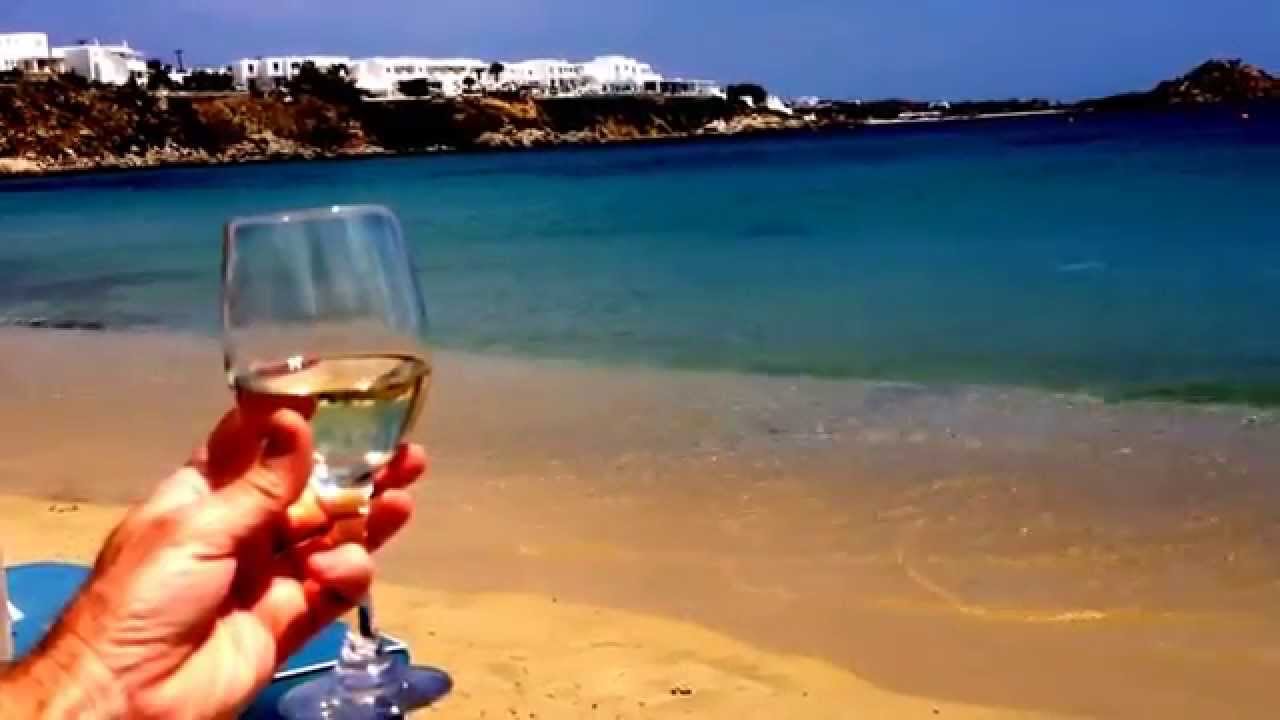 Super Paradise Beach may be called “paradise” but it is actually sinful. Known for its beautiful crystalline waters, soft golden sand… and parties that attract homosexuals, heterosexuals and bisexuals who come for sex as much as the sea and sun. Located near Paradise Beach, it is reachable by taxi-boat and is considered one of the most beautiful beaches of Greece. 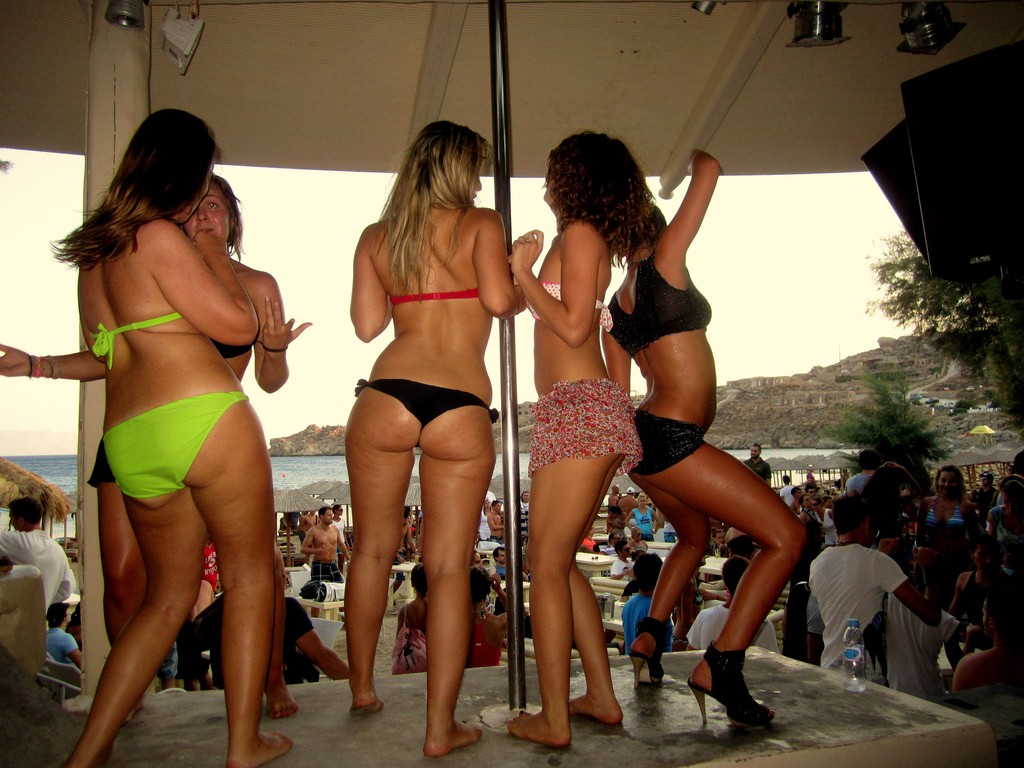 Chances are you’ll come across Petros the great white pelican, the offical mascot of the island. In 1958, a wounded pelican called Petros was found by local fishermen who nursed him to health. Petros was hit by a car in 1985 and failed to recover but three new pelicans were brought in. One, named in honor of the original Petros, is Petros II. 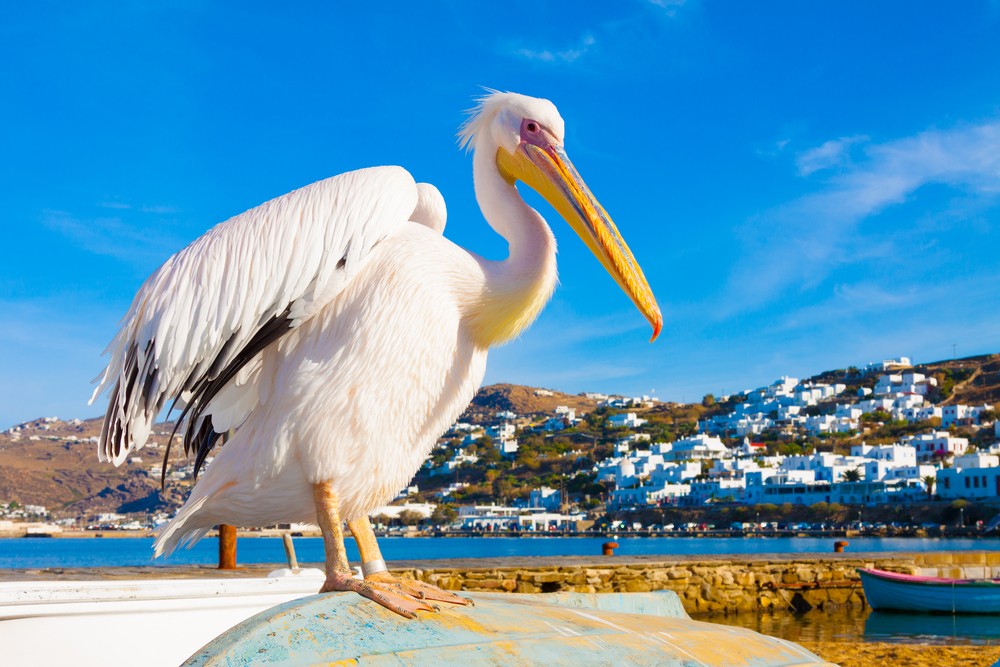 Kopanisti Mykonou is a salty spicy cheese of protected designation of origin that is mainly founded on Mykonos for more than 200 years. Kopanisti, meaning beaten, refers to its technique of preparation. 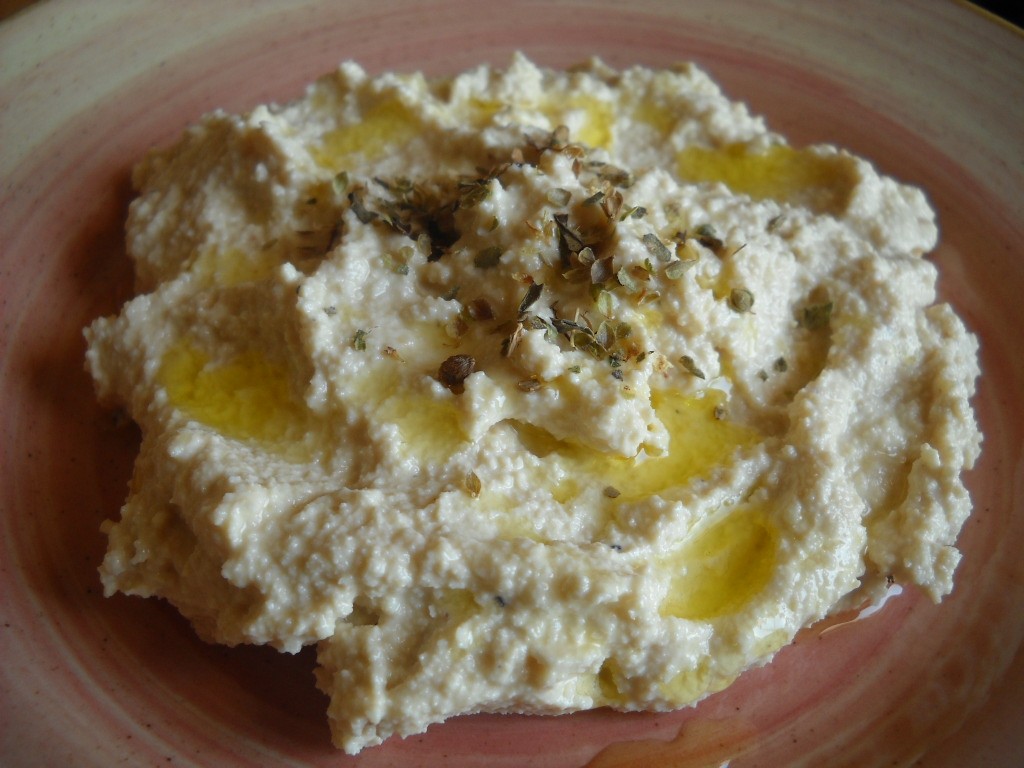 Do you blame filmmaker for being inspired by this island?

Nearest major international airport: International flights fly into Athens International Airport. From here passengers can continue via plane or by ferry from Piraeus or Rafina to Mykonos Island (about five hours).
Ground Transport
Cars are not permitted in the town of Mykonos, but you can leave your car in a parking place on the outskirts. Buses, taxis and small passenger boats provide transport around the island.
Timing
During summer (especially in August), Mykonos is one of the most crowded islands in Greece, so be sure to plan your holidays far in advance. To escape the crowds, visit the island during spring or fall.