The man has reportedly done it on several occasions

Local authorities and bar patrons on the island of Mykonos are on alert after a man has reportedly been using a drug to incapacitate female tourists and sexually exploit them.

A series of social media posts have been uploaded with the face of the man, described as an Arab, warning about him and his practice of luring unsuspecting female tourists at bars by buying them drinks and then slipping a ‘white powder’, possibly the sedative Rohypnol, in their drinks. 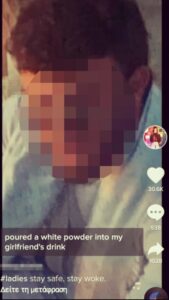 The matter came to light when a young tourist at the famous Beach Bar, Scorpios on Paraga beach, almost lost her senses after the “white powder” was slipped into her drink by the man. The scene was fortunately noticed by two of her friends, resulting in the intervention of the security guards, who kicked him out of the bar.

The victim claimed that the staff of the Beach Bar, Scorpios reacted belatedly, something the bar management denies.

The managers said they would inform the police about the incident in an effort to detect the perpetrator.

According to a complaint by another tourist, a similar incident happened a few days ago in a private bar in Chora, but the perpetrator managed to go undetected. “They slipped a powder in my best friend’s drink, but we couldn’t figure out who did it. The bar was packed,” one of the tourists said.

The “Roofie”, as the Rohypnol is called is 10 more potent than valium and is available in the form of a white and green pill.

Users of the substance describe its effect on the body as “paralytic”. The action of the drug begins in 20 to 30 minutes from the moment it is injected into the body and can last from 8 to 12 hours. During its effect, the victim is rendered totally incapacitated and is unable to react.

The person experiences loss of muscle control, confusion, drowsiness, and amnesia. Rohypnol is sold in European and Latin American markets as a sleeping pill but is illegal in the US.