UFOs off the Outer Banks?

Your guess is as good as ours, but that’s the conclusion many have come to after watching a video that’s been making headlines over the past couple of weeks.

William Guy shared the now-viral footage, which he refers to as a “real UFO sighting,” on YouTube on September 28. The clip in question appears to show a cluster of 14 glowing orbs hovering above a body of water said to be Pamlico Sound. 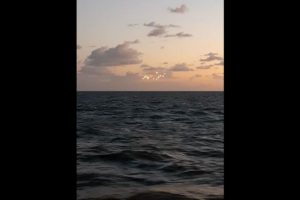 “Anybody tell me what that is?” Guy says in the 31-second video. “We’re in the middle of the ocean, on a ferry, nothing around. Look. Nothing around. No land, no nothing.”

According to The Charlotte Observer, Guy, who is from Indiana, is one of many workers sent to repair damage caused by Hurricane Dorian on Ocracoke Island. The video was reportedly filmed aboard a ferry crossing from Ocracoke Island to Swan Quarter.

But not everybody is convinced that the peculiar orbs are UFOs. A number of commenters have suggested that they’re actually military flares. After all, Camp Lejeune and Fort Bragg aren’t too far away.

Still, Guy wrote on YouTube that he’s not convinced.

“A lot of people I have talked to here on the island said it was flares, but they also said they have never seen anything like what I captured.”

UFOs or flares? You be the judge!