Arguably one of the most beautiful Greek cities

One of the most beautiful towns in the area of Argolis (in eastern Peloponnese) as well as one of the most romantic cities all over Greece, Nafplio was the first capital of the newly born Greek state between 1823 and 1834. 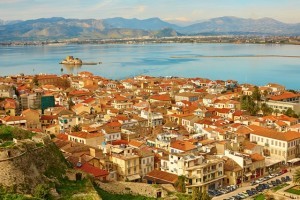 According to mythology, the town was founded by Nafplios, the son of god Poseidon and the daughter of Danaus (Danaida) Anymone. The town’s history traces back to the prehistoric era when soldiers from here participated in the Argonautic expedition and the Trojan War alike. The town declined during the Roman times and flourished again during the Byzantine times. Frankish, Venetian and Turkish conquerors left their mark in the town and strongly influenced its culture, architecture and traditions during the centuries. Ancient walls, medieval castles, monuments and statues, Ottoman fountains and Venetian or neoclassical buildings mesmerize the visitor with their unique architecture and beauty. 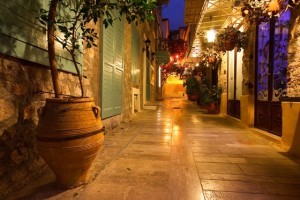 While you are here:

• Follow a dream trail to discover Náfplio’s precious gems starting from the medieval Old Town, the narrow cobblestone alleys, the neoclassical well preserved mansions with the Bougainvillea trees adorning their yards and balconies and the Turkish fountains.

• In the very heart of the city stands the Italianate Syntagma Square where you can admire important historic buildings and monuments. Two Turkish mosques (the first used to house the first “Mutual Learning” School and now operates as a cinema/theatre whereas the second was home to the first Greek Parliament), the Archaeological Museum with important artifacts from the Prehistoric and Mycenaean Era and the Municipal Gallery are among the buildings that stand out. Very close to the modern city stand the church of Agios Spyridonas, in front of which Governor Ioannis Kapodistrias was assassinated, and the church of Agios Georgios boasting important murals such as a copy of the famous Leonardo Da Vinci work “The secret Dinner”. 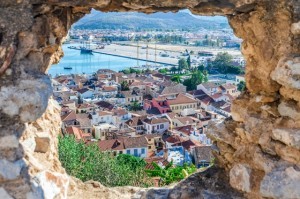 • Next stop: the Palamidi Castle, which proudly stands 216 m above sea level. In order to reach it you have to climb all of its 999 steps carved into the rock. Not to worry, though:the view from above here is totally rewarding! Venture into a place drenched in history, where the famous hero of the Greek Revolution Theodore Kolokotronis had been imprisoned; it seems as if its battlements -named after the renowned ancient heroes Themistocles, Achilles, Fokion, Leonidas, Epaminondas and Miltiades- are still carefully protecting the city. Agios Andreas battlement built at the top of the Castle by Venetian conquerors undoubtedly offers stunning views to the Argolic gulf and the Mycenaean plain.

Akronafplia is the historic rock at the foot of Palamidi hill, also known by its Turkish name “Its Kale” (meaning inner castle). Inhabited since prehistoric times, the peninsula consists of three levels, among which stand three independent castles, the oldest being the western one. It was there that the ancient acropolis was situated, fortified with polygonic Cyclopean walls. 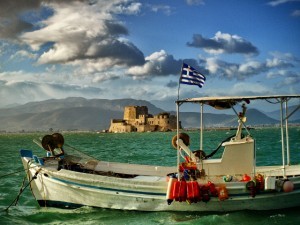 The most photographed spot of Nafplio –and its point of reference as well– is Bourtzi, the Venetian small fortress standing on the rocky islet of Agioi Theodoroi. During the Venetian rule it was connected to Akronafplia through a huge metal chain that secured the port against enemy ship attacks. At the beginning of 1860 in Bourtzi used to live the executioners of Palamidi prisoners. In the summer you can reach the fortress by boat departing regularly from the port. If you are lucky enough you may even be able to attend one of the fascinating festivals taking place on the islet!

Also worth visiting: The War Museum, housed in the buildings of the former (first) Military Academy/ the houses of regent Armansberg and Mauer/ the “Lion of the Bavarians” standing in the suburb of “Pronia”/ the prestigious Peloponnesian Folk Art Museum/ The Children’s Museum / the one of its kind “Komboloi Museum”/ The Town Hall in the Trion Navarhon square/ The statue of Ioannis Kapodistrias, modern Greece’s first prime minister in the square bearing the same name/ Theodoros Kolokotronis Park with his statue standing there/ the recently renovated “Pili tis Ksiras” (Shore Gate). 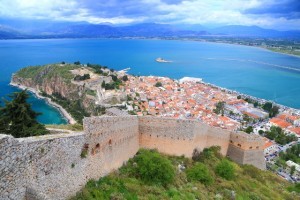 Activities: at sunset take a romantic stroll around the so-called “Arvanitia Promenade”, the most popular walk in town (1 km in length) dominated by the rocky landscape of Akronafplia/ use the tourist trains to enjoy a leisurely tour around the town/ buy some souvenirs from the Old Town’s souvenir shops, certainly “komboloyia” (a circular chain with beads, usually made of amber used by Greeks to keep hands occupied and ease stress) for the production of which Nafplio is particularly famous/ enjoy a cup of coffee or a delicious meal in Syntagma Square/ sip a drink at the port taking in the amazing view of Bourtzi – always lit up at night. 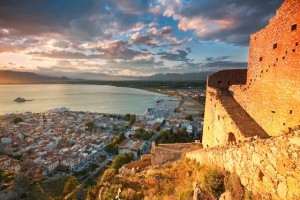 Beaches: In the summer, take an invigorating swim on the beaches of Arvanitia, Karathonas, Nea Kios, Miloi and Kiveri. You will also find a nice beach offering all kinds of facilities in Tolo, only 15 min away from the town.

• Tiryns (7 km N) is worth visiting for its famous archaeological site, Ancient Tiryns. The first buildings were constructed during the Neolithic Period. The cyclopean walls were built in the 14th and 13th century B.C. and embrace the upper, middle and lower acropolis. The city extends around the acropolis. You can also visit a Mycenaean tholos tomb situated 1km NW.

• Nea Kios (7 km W) is a very popular town by the sea, situated at the edge of Náfplio bay. It is worth visiting for the Cultural-Conference Centre (in the central square) and the Laskarideio Folk Art Museum. Enjoy fascinating events during Carnival, summer (“Mikrasiatika” and “Kiana”) and in September (“The Papalinas feast”).

• Myloi (12 km SW), where the ruins of ancient Lerna stand; it is where Hercules performed his second labour by killing “Lernaean Hydra”.

Nafplio is approximately 94 km far from Athens. You can reach the town either by car or by suburban buses (KTEL) departing regularly from Kifissos bus station. (More information at www.ktelargolida.gr)