NASA has been running aerial surveys over the Arctic for 10 years now, but the vast icy wilderness is still throwing up inexplicable surprises nobody’s ever seen before.
Case in point: just what are these weird circular formations spotted from a P–3 research plane flying over the Beaufort Sea last week?
The image above and below was captured by cryospheric scientist John Sonntag, who heads up NASA’s Operation IceBridge, which charts sea ice levels and behaviour at both of Earth’s polar regions.
You might not know Sonntag’s name, but you’ve almost definitely seen his photographic portfolio before, as his day job sees him aerially documenting the wintry, white vistas that define the world’s evolving Arctic and Antarctic landscapes.
Sonntag’s held this unique gig for a while now, but even he still gets a curveball now and then – like with these mysterious holes he first glimpsed two Saturdays ago, about 80 kilometres (50 miles) northwest of Canada’s Mackenzie River Delta.
“We saw these sorta-circular features only for a few minutes today,” Sonntag wrote from the field.
“I don’t recall seeing this sort of thing elsewhere.”
The holes, spotted while charting sea ice levels along the eastern Beaufort Sea, are as yet unexplained, but there are a few things researchers are speculating they might be.
First up, there are a couple of signs that indicate we’re looking at relatively young ice here, which is newly formed over a previously open body of water.
“The ice is likely thin, soft, and mushy and somewhat pliable,” says sea ice geophysicist Don Perovich from Dartmouth College in the UK.
“This can be seen in the wave-like features in front of the middle ‘amoeba’.”
Another tell-tale sign is the ‘finger rafting’ on the right-hand side of the image, which suggests what could be a general left-to-right motion of the ice.
This kind of distinctive zig-zag patterning occurs when two layers of ice collide with one another, forming finger-like protrusions on the surface as the two sheets are forced to splice together. 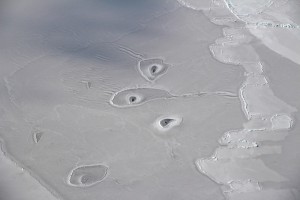