Our Solar System is full of surprises

Scientists have published new shocking data for the largest satellite of the planet Jupiter, Ganymede, as for the first time water vapor was detected in its atmosphere through the NASA Hubble Space Telescope.

As they reveal, these water vapors come from the amounts of ice that cover the surface. Previous research has shown that Ganymede has more water than all of Earth’s oceans, which are in the form of ice due to extremely low temperatures. Therefore, it is estimated that huge volumes of water from the largest satellite of our solar system are “buried” up to 100 miles below the icy surface.

Thus, astronomers, in an attempt to reconsider the observations of the last two decades of the Hubble Space Telescope, conducted new research which showed droplets from the evaporation of ice in the atmosphere. It was found that near the equator temperatures rise during the day, causing the atmosphere to heat up enough to release small amounts of water molecules. 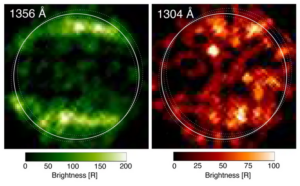 “So far only molecular oxygen has been observed”, explained one astronomer.

“This is produced when charged particles corrode the surface of the ice. The water vapor we have measured now comes from the sublimation of ice – that is, the conversion of the solid directly into gas – which is caused by the escape of water vapor through the heat”, he added.

It is expected that the study of the present findings will be given special emphasis by the “JUICE” mission of ESA (European Space Agency) scheduled for 2022, which is expected to reach Jupiter in 2029.