In 2013, an asteroid over 50 feet across and weighing some 10,000 metric tons slammed into Russia, unexpectedly

On March 7, 2018, NASA planetary scientist Marc Fries watched on a weather radar as meteorites plunged into the Pacific Ocean.

Four months later, on July 2, Fries and a group of marine researchers plan to pull these meteorites — chunks of primordial space rocks — out of the sea. No one has ever retrieved a meteorite from the ocean before, he said. But the effort is well worth it.

These particular space rocks, he noted, are different.

“This one is special,” said Fries, in an interview. “This one is tougher than your typical meteor.”

The meteorite fall — one of the largest Fries has observed on weather radar going back to the ’90s — involved space rocks that didn’t break, crack, and burn apart in the atmosphere as much as meteorites usually do. But understanding exactly what they are — and where they came from — means visiting the sea floor, where the heavy space rocks invariably sank.

Fortunately for NASA, an exploration vessel called the Nautilus, operated by the Ocean Exploration Trust, happens to be probing the ocean depths around this very area this summer, off the Washington coast. On Friday, Fries headed out to meet scientists aboard the Nautilus.

“The goal is to find whatever we can,” Nicole Raineault, a marine scientist and Ocean Exploration Trust expedition leader on the Nautilus, said in an interview.

But Fries has narrowed down the meteorite fall to a one square kilometer area, where the ocean is about 100 meters (330 feet) deep. 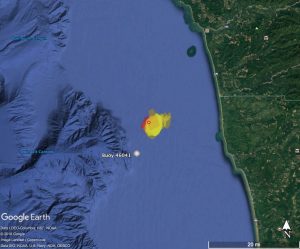 The Nautilus is equipped with deep sea robots, known as remote operated vehicles (ROVs), that are designed to scour the ocean floor with cameras and other equipment.

The ROVs will be outfitted with “magnetic wands” which will scan the floor for magnetic objects, as some 90 percent of meteorites are iron-rich, and magnetic. Sonar-like instruments on the ship, called backscatter, will bounce signals off the sea floor to try and spot any hard objects down there. The harder the material, the stronger the signal sent back to scientists above.

But in the end, Fries says that the less technologically advanced technique of just looking at the seafloor through the ROV’s cameras may lead researchers to these recently crashed space rocks.

“The best tools are eyes,” said Fries. “We’re going to look for rocks that don’t belong there.”

What they find could give scientists, and NASA, a better idea of the type of meteorites that will inevitably continue to bombard our planet — many small, but some big.

“It will be important for us to know what to expect to hit the ground in the future,” said Fries.

In 2013, an asteroid over 50 feet across and weighing some 10,000 metric tons slammed into Russia, unexpectedly.

“It was a meteor strike — the most powerful since the Tunguska event of 1908,” Bill Cooke of NASA’s Meteoroid Environment Office, said after the event. In 1908, a large meteor burned up in Earth’s atmosphere before colliding into Siberia, “releasing energy equivalent to about 185 Hiroshima bombs,” according to NASA.

Fries and Raineault seem confident they’ll find something in the ocean — even though this feat has never been accomplished before. On the weather radar, Fries picked up a meteorite as large as 10 pounds and 12 centimeters across. However, he notes there could be larger chunks of rock, as weather radars aren’t designed to pick up big metallic objects — they’re made to track smaller particles in the atmosphere.

But even if this early July 2 effort — which you can tune into and watch online — doesn’t find what Fries is looking for, it won’t be a failed mission. Exploration is inherently uncertain, but the rewards valuable.