Based on the 2018 military strength ranking compiled by Global Firepower

NATO member and partner forces are in Norway for a sprawling military exercise called Trident Juncture — the largest since the Cold War, officials have said.

Russia is not happy with NATO’s robust presence next to its territory and has decided to put on its own show of force.

From November 1 to November 3, Russian ships will carry out rocket drills in the Norwegian Sea, west of activities related to Trident Juncture, which runs from October 25 to November 7.

The exercises come at a time of heightened tension in Europe, home to some of the world’s most capable armed forces, based on the 2018 military strength ranking compiled by Global Firepower.

The ranking aims to level the playing between smaller countries with technical advantages and larger, less-sophisticated countries.

Additional factors — geography, logistical capabilities, natural resources, and industrial capacity — are taken into account, as are things like diversity of weapons and assets, national development, and manpower.

NATO members, 27 of which are European, also get a boost, as the alliance is designed to share resources and military support. The US military has a massive presence in Europe — including its largest base outside the US — but isn’t included here as the US isn’t part of Europe.

Below, you can see the 25 most powerful militaries in Europe. 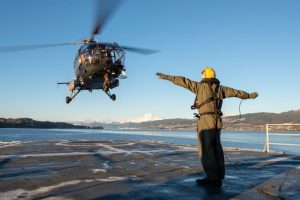