The Council of the North Atlantic Treaty Organisation (NATO), which includes the ambassadors of all 29 NATO Allies, will meet on Friday 28 February, following a request by Turkey to hold consultations under article 4 of NATO’s founding Washington Treaty on the situation in Syria.

“Today, the #NATO Council meets at Turkey’s request to consult under Article 4 of NATO’s founding Washington Treaty on the situation in Syria,” Stoltenberg wrote on Twitter. Under Article 4, an ally can request consultations if they believed their territorial integrity, political independence or security is threatened.

Under article 4 of the Treaty, any Ally can request consultations whenever, in the opinion of any of them, their territorial integrity, political independence or security is threatened.

Turkish position in Syria came under a barrage of air strikes by the Assad government forces with the support of the Russian military resulting in tens of dead troops. The Russian Defence Ministry announced it did not take part in the attack.

Turkey said it would open the passage to Europe for thousands of refugees trapped in the region. Turkish media have been showing images and video footage of migrants and refugees amassing on the Greek Turkish borders in the North of Greece and along the western coast of Turkey opposite Greek islands. 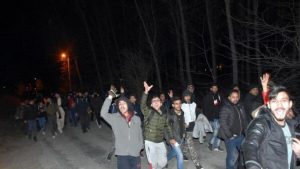