To the question “If we had a parliamentary election today, which party would you most likely vote?”, 31.2% of the respondents said ND against 18.1% who said SYRIZA.

Extreme right Golden Dawn followed with 5.8%, the Movement of Change 5.6% and the KKE (Communist party) 4.7%. while the other parties already represented in the House like the Union Centrists, ANEL and Potami did not make the 3% threshold necessary for a political formation to enter parliament. 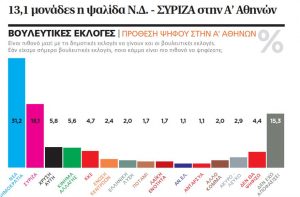