Read the story behind the man’s influence in politics

The political controversy culminates after allegations made by ANEL (Independent Greeks party) MP Pavlos Chaikalis, after the New Democracy party entered the “game”, publicizing photos of the person supposedly attempting to bribe the ANEL MP. This is George Apostolopoulos, who at the time the photo was taken was a close associate of Panos Kammenos and even participated in meetings of the ANEL leader with president of SYRIZA Alexis Tsipras.

The photo being published is dated March 22nd, 2013, when the president of ANEL met with current SYRIZA leader Alexis Tsipras, in SYRIZA’s offices in Parliament.

Mr. Kammenos was accompanied by the then Parliamentary Representative of ANEL Notis Marias, and George Apostolopoulos, who was a close associate of the party’s chairman as evidenced by the fact that he participated in the informal party troika which met with SYRIZA’s leadership.

The meeting of which photos were published between Mr. Kammenos and Mr. Tsipras, the SYRIZA delegation consisted of party president Alexis Tsipras, director of the office of the party president Nikos Pappas and party spokesman Panos Skourletis. across the three-member SYRIZA delegation sat ANEL president Panos Kammenos, current ANEL EU MP Notis Marias and George Apostolopoulos who in March of 2013 was in the core of the ANEL party, but is now being condemned by Pavlos Chaikalis as the man who tried to bribe him to for a vote of President of the Republic.

The snapshots released by New Democracy, George Apostolopoulos is sitting on the right of Mr. Kammenos, while the left is occupied by then parliamentary representative of ANEL, Notis Marias. On the opposite side of the table is Mr. Alexis Tsipras, accompanied by the Director of his office Nikos Pappas and SYRIZA spokesman Panos Skourletis. 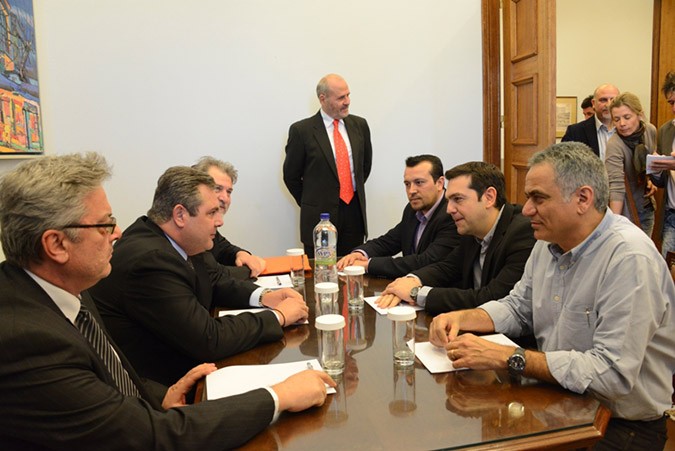 The second photo depicts George Apostolopoulos standing on the right of current MEP of ANEL, Notis Marias who is watching the dialogue between Kammenos-Tsipras. 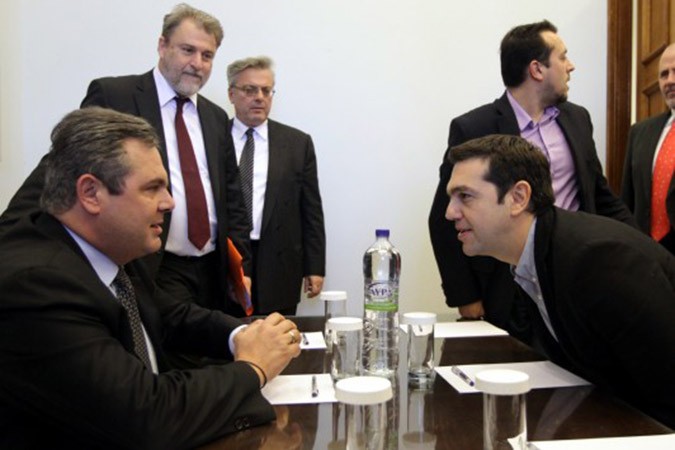