Netflix’s latest quarterly results saw the company bounce back from a Q2 slump in subscriber growth. While the net addition of 500,000 paid users in the U.S. fell well short of its 800,000 forecast, international growth outstripped predictions, recording a net 6.3 million – 100,000 more than expected. In combination with profits which far exceeded forecasts, share prices were up 8 percent in after-hours trading. To Netflix, subscriber growth is what iPhone sales are to Apple: the one metric that Wall Street tends to focus on, because it’s well-known that the company’s strategy of spending billions of dollars on content will only work if its subscriber base continues to grow.

Over the past twelve months, Netflix spent more than $13.5 billion on streaming content. Add to that $4.9 billion in content payments due within 12 months of September 30 and another $3.4 billion due in more than a year, and it becomes clear why the company’s shareholders are itching for new subscribers.

The beauty of Netflix’s gamble on making its own content is that the cost of producing a show is the same regardless of whether 10, 100 or 500 million people are watching it. Once the company reaches a certain number of paying subscribers, the business will carry itself nicely. For now, however, it doesn’t: Netflix burned through $2.9 billion in cash over the past 12 months, which is why its shareholders will continue to keep a keen eye on the company’s subscriber growth. 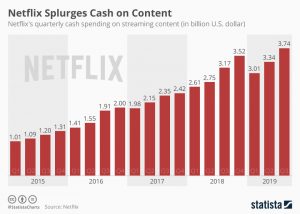