“Persona non grata for reasons of national security” is considered by the Albanians the journalist of “Proto Thema” and protothema.gr Panayiotis Savvidis.

Our journalist had gone to Vouliarates in Northern Epirus to cover the memorial service of the 35-year-old member of the Greek minority in Albania Konstantinos Katsifas, who was murdered by Albanian police officers 40 days ago.

Panagiotis Savvidis was detained for about ten minutes by the Albanian authorities at the border crossing of Kakavia, where he was interviewed about his status and the reason for his visit to the country.

Among others, the Albanians searched his bag and used as a pretext his press recorder, claiming that he should have a special license to have it with him!

After contacting central offices in Tirana, they questioned him about his Katsifa murder reports, indicating that they had been informed about them

It is worth noting that the Albanians had made known in the past few days that there is a list of 60 names of undesirable Greeks in the country, without however making this list public. Without giving sufficient explanations, they forbade the journalist of “Proto Thema” to enter the neighboring country.

Albanians are reportedly stopping buses from Greece at the border and they take the Greeks passengers for questioning asking them where they are going and if they can prove it. They warn them that they can go anywhere except the Vouliarates. At the same time and in accordance with their intimidation tactics, they tell them that they suffer consequences if they say they are going to somewhere else but go to Vouliarates instead, as they warn them that they will be following them!

According to the Albanian authorities, only the relatives of Konstantinos Katsifas are allowed to go to Vouliarates. 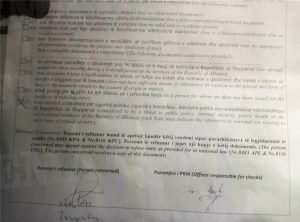