The newly-appointed Greek Minister of Defence, Nikos Panagiotopoulos stressed that his top priority would be to reinforce the country’s deterrent power and readiness of its armed forces, during the official handing over of the Ministry by the outgoing Minister Evangelos Apostolakis. 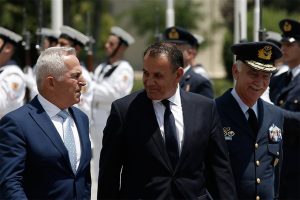 Mr. Panagiotopoulos, as well as the new Deputy Minister of Defense Alkiviadis Stefanis, was received shortly after 2 pm at the Pentagon, by Mr. Apostolakis, along with the entire Army Staff Leadership. 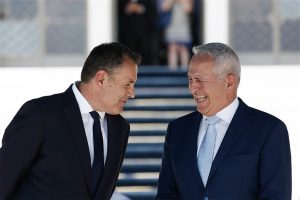 During the ceremony, the outgoing Minister underlined that Greece’s Armed Forces were at a high operational level while highlighting their key role as a factor of stability in the wider region of the Southeastern Mediterranean.
On his part, the new Minister of National Defense Nikos Panagiotopoulos, after publicly thanking PM Kyriakos Mitsotakis for his appointment at the head of the Hellenic Armed Forces, sent a clear message in every direction that our country has the necessary deterrent power to face any threat.

The two men inspected the honourary guard at the Pentagon for the handing over ceremony.