The fire in Drosopigi, located between Kryoneri and Afidnes, is now out of control while the flames have entered the first houses in the area.

At this time the front is moving towards Kryoneri. This development resulted in the municipality of Dionysos asking the residents of Kryoneri to leave their homes in an orderly fashion. At the same time, it appeals not to obstruct the access of firefighting vehicles with other vehicles. In fact, a new message was sent from 112 to the residents of the area: “If you are in Drosopigi, evacuate now to Athens from the Athens-Lamias highway”. 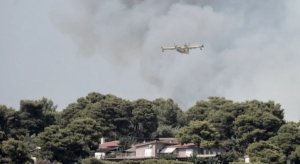 Firefighters are giving a titanic battle to contain the fire front and bring it under control.

In the meantime, a fire broke out next to the National Highway and specifically at the Varybombi junction. 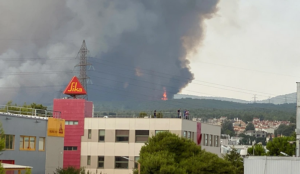 Airplanes are on the spot dropping water. Specifically, the new front is located opposite a department store and a supermarket in the area.

It is recalled that there was a resurgence on three fronts in Varybombi at noon on Thursday.

Tatoi: The fire has reached the royal tombs & containers with the historic items are in danger 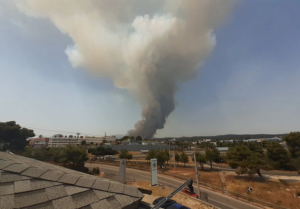 Earlier in the afternoon, a message was sent from 112 for the evacuation of Ippokratio Politia and Drosopigi.

The second resurgence took place inside the former royal estates and the third in the stream of Helidonou, between Adames and Tatoi airport.