The government’s communication effort to give a positive impression to the Eurogroup agreement does not seem to be working that good. According to a survey by PRORATA of the “Newspaper of the Editors”, the Greeks see only the painful measures and disregard the prospect of Greece finishing the economic program. 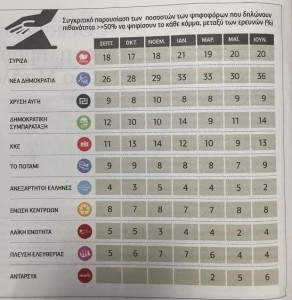 According to the survey, citizens consider the measures voted that increase the tax-free and the pension cuts to be more important than the success of the closure of the country’s 2nd evaluation.

67% of the the people that answered the survey, described the agreement as “rather bad” or “bad” while for SYRIZA’s voters the figure for the same question is 55%, compared to 30% who consider it to be “rather good” or “good”. 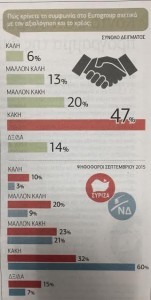 In the PRORATA election assessment, the gap between New Democracy and SYRIZA widens, with the main opposition party winning six points from May reaching 36% while SYRIZA stays at 20%.

The “Potami” political party wins two points and climbs to 9%. Golden Dawn remains at 9%, while at the same level as in May remains the Union of Centrists, which is at 8%.

The People’s Unity rises to 4% from 2% in May. The Independent Greeks (ANEL), that participate with SYRIZA in the coalition government, on the contrary, fell to 2%, from 5% that was the in previous month. 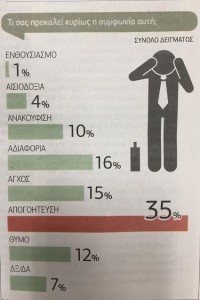 The survey was conducted on June 19 and 20, the week after the Eurogroup last Thursday.