After observing a part of the sky near the Southern Constellation of Ara for about two months using MeerKAT, a radio telescope based in the Karoo desert in South Africa, our team of scientists noticed something strange. The radio emission of an object brightened by a factor of three over roughly three weeks.

Intrigued, we continued watching the object and followed this up with observations from other telescopes. We discovered that the unusual flare came from a binary star system – two stars orbiting each other – in our own galaxy. The finding, published in the Monthly Notices of the Royal Astronomical Society, has, however, turned out to be very difficult to explain. 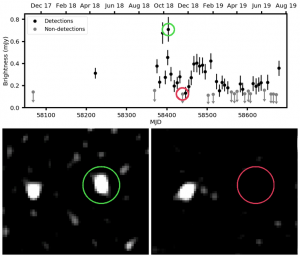 This is MeerKAT’s first discovery of a “transient source” – an object that is not constant, either undergoing a significant change in brightness or coming in and out of view altogether. Given the catchy name “MKT J170456.2-482100”, it was found in the first field observed with the telescope, which means it is likely to be the tip of an iceberg of transients waiting to be discovered.