In May, Varoufakis confirmed he will run for prime minister in Greece’s next general election leading his own political party

A new book by former Greek finance minister Yanis Varoufakis has been described as “a charming and utterly fascinating letter to his 14-year-old daughter”.

Talking to My Daughter About the Economy Or, How Capitalism Works — And How it Fails is a series of letters to his daughter about the Greek crisis and follows on from his previous book, Adults in the Room.

Novelist Mark Haskell Smith writing in the LA Times, says Varoufakis’ “account of the rampant corruption and cronyism among the international banking community and Western governments” is “epic and harrowing”.

“In his new book, Varoufakis tells the story of the economy: how it started, how it works and how we might be able to curb its excesses and abuses. It’s a sharp analysis mixed with philosophical rumination told in a breezy mix of family anecdotes, Greek myth, world history and a surprisingly deep dive into the hidden meanings embedded in ‘Star Trek’ and ‘The Matrix’.”

In May, Varoufakis confirmed he will run for prime minister in Greece’s next general election.

The Greek economist also said that his plans to change Europe in the first half of 2015 had been torpedoed by the Greek government.

However, Varoufakis has been criticized by numerous Greek and EU politicians for his policies and negotiating tactics during his tenure as finance minister.

Varoufakis will be speaking at two events at the LA Public Library on May 17. 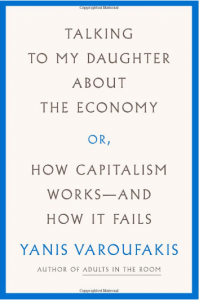