Bulls forward Nikola Mirotic is still in the NBA’s concussion protocol, 10 days after teammate Bobby Portis punched him in the face at practice, but even when he’s ready to return to action, it might not be in Chicago.

The Chicago Sun-Times reports that Mirotic has given the Bulls a “me or him” ultimatum, asking the team to trade one of them before Mirotic returns to the court. Although Mirotic has a no-trade clause in his contract, both the Sun-Times and Chicago Tribune report he’d be willing to waive that to facilitate a deal.

In addition to the concussion, Mirotic suffered two broken bones in his face when Portis punched him in practice Oct. 17. The Bulls suspended Portis for eight games after the incident. 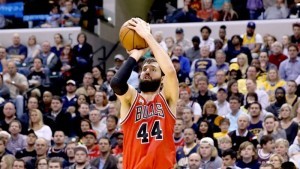 Bulls coach Fred Hoiberg said Mirotic will have his next concussion check next week. As for the broken bones in his face, the team now hopes he can avoid surgery. When he returns to action, he’ll likely wear a facemask.

“The dizziness is starting to go away. The headaches are subsiding. The important thing is he’s making progress,” Hoiberg said (via the Tribune). “He’ll have a meeting with the (ear, nose and throat) doctors next week. That’ll be the next time we most likely have an update on him.”

Portis told the Sun-Times that Mirotic hasn’t responded to his texts or phone calls to talk about the incident.