The UN finally released the video of the incident

A North Korean defector shot at least five times as he dashed across the Demilitarised Zone has woken up, as video of his desperate dash to freedom was released.

The man, a North Korean soldier, was found unconscious and critically injured under a pile of leaves on the southern side of the Joint Security Area (JSA) after fleeing amid a hail of at least 40 gunshots on November 13.

After undergoing two surgeries last week for repairing internal organ damage and other injuries, the soldier has now regained “sharp” consciousness and is no longer relying on a breathing machine, according to hospital official Shin Mi-Jeong. While his condition is improving, doctors plan to keep him in the intensive care unit for at least several more days to guard against possible infections and other after effects.

The dramatic video released by US-led UN command shows the soldier’s daring escape in a jeep and then on foot, being shot at least five times as he limped across the border and was rescued by South Korean soldiers.

The North violated the armistice agreement ending the Korean War by firing across and physically crossing the border in pursuit of the soldier, Colonel Chad G Carroll, a spokesman for the UN command, told reporters in a live TV briefing.

The video shows the soldier speeding down a tree-lined road, past dun-coloured fields and shocked North Korean soldiers, who begin to run after him.

He crashes the jeep near the line that divides North and South and the blue huts familiar to anyone who’s toured the area, which is the part of the border where North and South Korean soldiers face each other at their closest distance just meters away.
(Click to enlarge image) 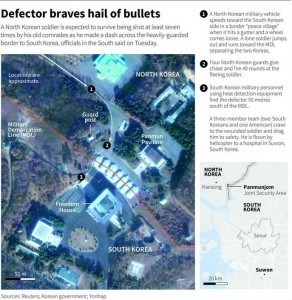 There were no tour groups at the time of the defection, Colonel Carroll said.

Soldiers from the North sprint to the area, firing their weapons at the defector; one hurries across the dividing line before running back to the northern side.

South Korean soldiers then crawl up to the defector, who has fallen injured in a mass of leaves against a small wall. They drag him to safety as North Korean troops begin to gather on their side of the line.

Surprisingly, North and South Korean soldiers didn’t exchange fire in the first shooting in the area in more than three decades.

South Korea’s military has said North Korean soldiers used handguns and AK rifles to fire at their former comrade, who was hit at least five times.

A UN Command helicopter later transported him to the Ajou University Medical Centre near Seoul.

Colonel Carroll said the North violated the armistice by: “One, firing weapons across the MDL [DMZ]; and two, by actually crossing the MDL temporarily,” referring to the military demarcation line that bisects the Koreas.

A UN Command statement said officials notified the North’s military of these violations and requested a meeting to discuss the investigation results and measures to prevent future such violations.

North Korea hasn’t responded and its official media haven’t reported on the case. The North has previously accused South Korea of kidnapping or enticing North Koreans to defect. 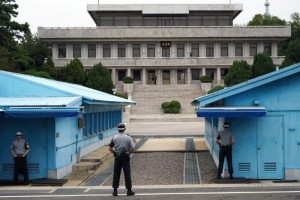 The JSA, jointly overseen by the American-led UN Command and by North Korea, is inside the 4km-wide Demilitarized Zone.

Since regaining consciousness the soldier-defector has been shown South Korean films and has asked to watch television, Yonhap news agency reported.

A South Korean flag has also been hung on the wall of his hospital room “to provide psychological security,” a government official told Yonhap.

While treating the wounds, doctors have removed dozens of parasites from the soldier’s ruptured small intestine, including presumed roundworms that were as long as 27 centimeters, which may reflect poor nutrition and health in North Korea’s military. The soldier is 1.7 meters tall but weighs just 60 kilograms.

The man’s escape this month was the first time a North Korean soldier had defected since 2007.