Also, one in 10 children are obese by the age of five, rising to one in five by age 11

Obese people now outnumber smokers by two to one, Cancer Research UK has warned, as it said obesity causes more cases of some cancers than cigarettes.

Just days after the charity was heavily criticized for its new obesity campaign on social media, it said more needs to be done to help people lose weight to reduce their risk of cancer.

Smoking is still the UK’s biggest preventable cause of cancer and carries a much higher risk of the disease than obesity.

But obesity is a cause of 13 different types of cancer, and trumps smoking as a leading cause for four of these types, Cancer Research UK said. 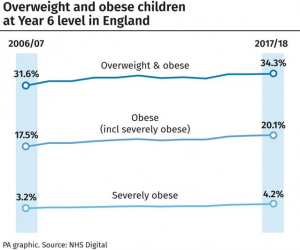 Its analysis shows that excess weight causes around 1,900 more cases of bowel cancer than smoking in the UK each year.

National data shows that around one in three adults in the UK are obese, while around a third more are overweight.

One in 10 children are obese by the age of five, rising to one in five by age 11.