Rescuers search for 32 missing sailors after collision with bulk carrier

Rescue workers are trying to locate 32 missing sailors and prevent a major oil spill after an Iranian-managed oil tanker collided with a Chinese bulk carrier off the coast of China on Saturday night, leaving the tanker ablaze.

The Sanchi tanker, which was carrying crude oil from Iran to South Korea, collided with the CF Crystal about 160 nautical miles east of the mouth of the Yangtze river, according to China’s ministry of transport.

Chinese rescue ships on the scene reported that the tanker was still floating and on fire on Sunday, with oil leaking into the sea, the ministry said. It added that China’s maritime search and rescue centre was coordinating the response and that South Korean authorities had also dispatched a ship and an aircraft to assist with the incident.

All 32 sailors on board the Sanchi, 30 of them Iranian and two from Bangladesh, are missing. A photograph released by the Shanghai Maritime Safety Administration on its official account on Weibo, a Chinese social media platform, showed flames and thick black smoke emanating from the length of the Sanchi.

A South Korean coast guard official said the tanker was still on fire at 1pm on Sunday, according to Reuters. 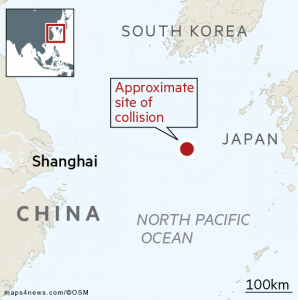 The 274-metre long ship departed from Assaluyeh, a major Iranian port that serves South Pars, the world’s largest gasfield, last month. It was en route to the South Korean port of Daesan.

The 21 crew on board the CF Crystal, all Chinese nationals, are safe. The Chinese ship was damaged but “without jeopardising the safety of the vessel”, the Chinese government said.

The Panama-flagged Sanchi was carrying 136,000 tonnes of condensate, which is equivalent to around 1m barrels of oil, and is managed by the National Iranian Tanker Company, according to Bloomberg.

The Hong Kong-flagged CF Crystal, which is operated by Wenlin Changfeng Shipping, a Chinese company, was carrying 64,000 tonnes of food from the US to the province of Guangdong, in southern China, according to the Chinese transport ministry.

The Chinese authorities did not say what was believed to have caused the collision. 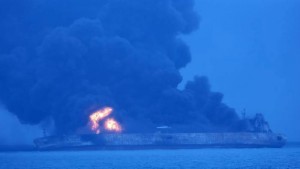 China has been trying to tighten its environmental controls and improve its response mechanisms following several high-profile spills in the past few years.

In 2015, China National Petroleum Corp agreed a $32m environmental settlement for victims, after China’s worst crude oil spill fouled the coast near the northeastern port of Dalian in 2010.

ConocoPhillips and its local partner Cnooc were fined and required to pay compensation because of a leak from an offshore oil well in Bohai Bay, near Dalian, in 2011.