Air Traffic Controllers and Telecommunications Employees of the civil service aviation will take part in the nationwide strike in Greece declared by the country’s two largest unions, GSEE and ADEDY for Wednesday, May 17. As a result flights of Olympic Air and Aegean will be either canceled or rescheduled on the day. Following are the changes in the routes. 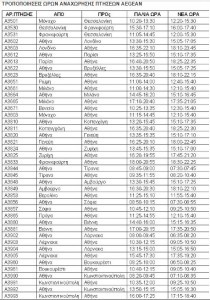