Greens most Greek successful club despite missing from competition since 2011

It might be 6 years since Panathinaikos last appeared in Europe’s top club competition, the Champions League, but the greens are still the most successful Greek club since the Champions League group stage format was introduced in 1995. UEFA released a list of the all-time club ranking, and PAO are sitting on 23rd spot with 143 points in 28 appearances, six spots above their arch-rivals Olympiakos, who despite having played two more times in the competition, are 29th with 134 points. AEK Athens are in 69th place with 52 points in 14 appearances, PAOK Thessaloniki are in 236th place with 8 points in 6 appearances and finally, Larisa are placed 348th with 2 points from their single appearance. 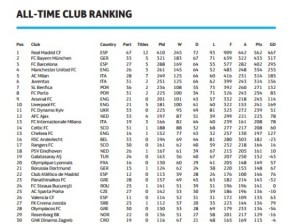