There was panic last night after a blaze tore through a Ukrainian nuclear power plant reactor built in the same year as the Chernobyl nuke disaster.

As a result, the nuclear power plant had to be be shut down after it was engulfed in flames. 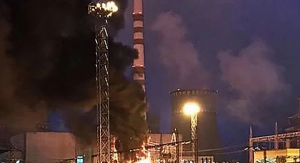 Toxic black smoke could be seen filling the sky above the nuke plant in the dramatic video footage.

The overnight blaze broke out in the transformer of the third reactor unit at Rivne.

It was built  in 1986, the year the Chernobyl nuclear station exploded in Soviet Ukraine, say reports.

Three dozen firefighters and ten fire trucks rushed to the blaze to extinguish it after emergency procedures were set in place.

The cause is so far unknown.

There were no casualties, it was claimed.

Petro Kratik, head of information at Rivne nuclear station, confirmed there had been a fire and said that reactor number three was shut down as a precaution.

He added: “According to the international scale of emergencies at nuclear stations this event level is zero.

“The radioactive and ecological situations did not change.” 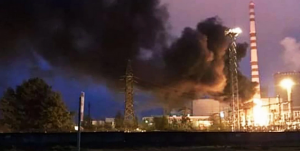 The plant was reconnected to the Ukrainian grid several minutes before midnight after the blaze was killed, say reports.

It comes after Ukraine last week marked the 33rd anniversary of the notorious Chernobyl explosion which sent radioactive pollution across Europe.