A PAOK goal was disallowed for off-side

The match between PAOK Thessaloniki and AEK Athens for the Greek Super League at Toumba stadium has been temporarily stopped after the referee and his assistants are deliberating whether to allow or disallow a PAOK goal in the 90th minute of the match. The goal was scored by Fernando Varela, but the assistant judged another PAOK player who was in an offside position was obstructing the goalkeeper’s vision. The match was 0-0 until the moment of the stoppage. Currently, AEK Athens are on the top of the table with 54 points followed by PAOK, who have 52 points after the appeals committee of the football federation granted the Thessaloniki club the 3 points it had lost due to an incident in the derby with Olympiakos. 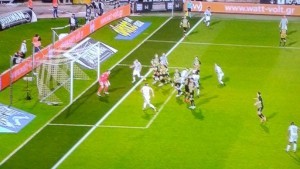