They have uploaded a petition to Avaaz

PAOK Thessaloniki fans have threatened the Greek state that they would refuse to be drafted in the event a war broke out if their team was penalised with a severe punishment! “If you dare to impose a crushing penalty on PAOK […] you can automatically consider our draft papers in the army, in the event of recruitment, as mere trash. No PAOK fan in battles for your Greece”, they wrote in a petition posted on Avaaz.org.

PAOK supporters have been collecting online signatures for over two days in a petition addressed to Greek PM Alexis Tsipras titled “Take your hands off PAOK”.
The organisers of the petition have effectively said that they would not go to war if Greece found itself in battle, if their team was unduly punished following last Sunday’s unprecedented incidents in the match against AEK Athens, when the owner of PAOK, Ivan Savvidis invaded the pitch after a PAOK goal was disallowed in the 90+ minute. 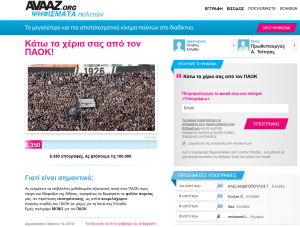 So far, the petition has gathered 6,350 signatures of supporters from the Thessaloniki team, prompting fans to reach the 100,000 mark.
Avaaz is a global platform for activists to table their demands with more than 46 million members in 195 countries, having done over 365,000 actions since its inception in 2007.