The hunt is on to find out who the terrorists spreading fear and panic in Paris were and to find their accomplices – One was a French petty criminal, whereas another passed through Greece on what may have been fake passport

* The first attacker to be identified was Omar Ismail Mostefai, aged 29, who is said to have been one of the group of at least three terrorists who spread fear, panic and death at the Bataclan concert on Friday. As police stormed the building he blew himself up, leaving police to identify his body through fingerprints. Though he had eight convictions for petty crime between 2004 and 2010, he had never been in jail or implicated in a terrorist investigation. Six of his relatives have been captured, but French law only allows that they be kept for four days.

* Le Figaro reports that tow of the attackers were between 15 and 18 years of age, according to a Forensic source that spoke with Europe 1.

* Three suspects linked to the attacks in France were arrested in Belgium with Prime Minister Charles Michel stating that at least one of the people arrested had spent the previous night in Paris. One of the vehicles found – a grey Volkswagen Polo – was registered in Belgium and hired by a French national living in Belgium.

* All eight attackers used Kalashnikov assault rifles and wore the same type of suicide vests with shrapnel mixed with explosives, intended to cause maximum casualties.

* The Federal Bureau of Investigation (FBI) and other investigative forces are gathering information trying to ascertain the identity of the bombers. The authenticity of the Syrian passport belonging to Ahmed Almuhamed, one of the attackers who detonated himself outside gate D of the Stade de France, is being examined. It is believed that it may have been a forged passport issued in Turkey. CLICK HERE for more info about Almuhamed’s passage through Greece. 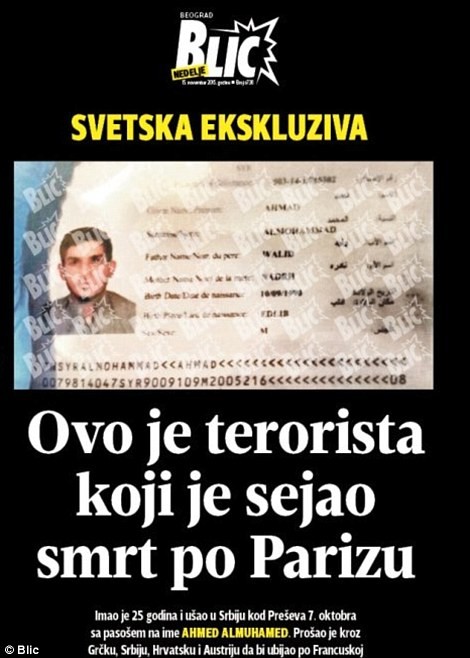