Six months after the collision between the Greek frigate F-451 “Lemnos” and the Turkish F-247 “Kemal Reis”, the first photos of the later have emerged.

The patched side of the Turkish frigate can be seen in photos that accompany the press release regarding the participation of TCG “Kemal Reis” in NATO’s big annual exercise “Dynamic Manta 21”.

The Hellenic Navy participates as well with one frigate, one submarine and one P-3B Orion.

On August 12th 2021, during the crisis between Greece and Turkey over the illegal surveys of the Turkish ship “Oruc Reis” in the Greek EEZ, the Turkish Frigate “Kemal Reis” attempted to ram the Greek frigate “Lemnos”. The Greek commander narrowly avoided the collision by reversing the engines and then rammed the Turkish ship.

People in Medieval art who’re getting murdered but just don’t give a damn! (hilarious photos)

Turkey initially claimed that it was the Greek ship that had suffered serious damages, but when the photos of the two ships were made public it was revealed that TCG “Kemal Reis” was the one that needed serious repairs. 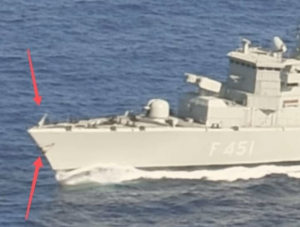