Hard talk in the Parliament

The prime minister, Alexis Tsipras, for the first time acknowledged the possibility of a precautionary credit line for Greece. In his speech at the Parliament, he said that “what is the bottom for us is the ceiling for you” leaving open all possibilities as he did not make a clear rejection of a such a version. His specific reference was as follows:

“At the end of 2014, there was a GDP loss of 25% and unemployment had gone to 27%. Then, we were on the 5th year of the memoranda with the economy of the country derailed. Even the primary surplus of Samaras’ government appears from revised ELSTAT data that it was not a surplus. Despite the fantasies of that time regarding the “success story” and the precautionary credit line, what is the bottom for us is the ceiling for you”.

At the same time, he attempted to pass the message that it is “non-negotiable and final” that the memoranda will definitely belong to the past by August 2018. 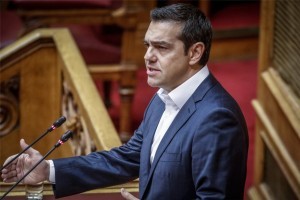 The leader of New Democracy Kyriakos Mitsotakis unleashed a fierce attack against Alexis Tsipras at the beginning of his speech on the issues of lawlessness and violence by groups such as Rubikon.

“You burned Athens in 2008, you nurtured the Rubikon”, he said, pointing out that the Prime Minister did not find a word of sympathy for the victims of Marfin.

Answering to the Prime Minister’s attack, Mr. Mitsotakis said that “on May 23, 2015, the outflow of deposits amounted to 20 billion Euros amid the “creative vagueness” of Mr. Varoufakis. At the same time, Tsipras was reassuring us that the deal was close. You smiled casually at Mr. Junker making jokes about the tie. Instead of an agreement, the government was working on a double currency plan thinking it would threaten the Eurozone. Finally, you brought us the capital controls and a third unnecessary memorandum that skyrocketed taxation”. 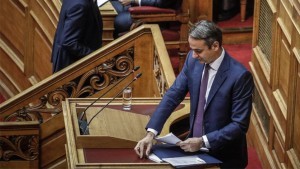