The context of the interview was in relation to an interview Daniels gave in April on ABC’s “The View.” The Daily Beast reports:

During the interview, Daniels claimed that, shortly after she first told her story to In Touch magazine back in 2011, a man approached her in a Las Vegas parking lot and threatened her life, urging her to “leave Trump alone” and “forget the story.” The duo then released a composite sketch of the purported parking-lot assailant, with Daniels explaining that she didn’t go to the authorities seven years ago because she both feared for her safety and, as a newly-minted mother, didn’t want her husband at the time to learn about the supposed Trump tryst. She did, however, concede that, “I always feel like you should stand up for yourself and you should report it.”

It was that interview that motivated Reign to come forward and tell her story.

“It’s very upsetting to see her speak like that and then I think, but I know the real you,” Reign said. “I was there. I saw what you did.”

Reign claims that the incident happened on November 15, 2017, approximately a month after the Harvey Weinstein scandal broke and the #MeToo movement was in full swing.

“[Daniels was] basically making fun of the Me Too movement, in so many words,” Reign said, claiming that Daniels told the crew: “Oh, I could be seen as Harvey Weinstein because I’m flirtatious with my crew members and I can be inappropriate.”

Reign then gave her account of the alleged assault.

“I’m fully clothed in my outfit, I’m standing and signing my paperwork, and all of a sudden I feel two hands from behind me grab my ass and make sexual moaning noises,” Reign claims. “I felt a pit in my stomach and thought, shit, my scene partner, Michael Vegas, is in the other room… who is this?”

“So I turn around and it’s a crewmember from set,” Reign continued. “I look him directly in the eye and go, ‘What the f*** are you doing?’ and I look so upset. So I thought, OK, I can either ruin my makeup, which took an hour and a half to do, or I can go do my scene as quickly as it’s going to take and then as soon as it’s over, I can go and confront Stormy, the director who has all the power that day on set, and the man that did this to me.”

The allegations were reportedly first made public on January 14 in a back-and-forth feud on Twitter. 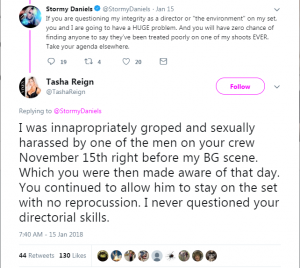 Reign claims that she went to Daniels, the alleged assaulter, and to the owner of Wicked Pictures and that she properly documented the incident but nothing happened.