17 years ago, U.S. forces and their allies from the Northern Alliance rolled into Kabul. Today, America’s longest war is still dragging on and half of Afghanistan has been retaken by the Taliban. ISIS have also become more active in the country and 14,000 U.S. troops are still serving there in an attempt to contain growing levels of extremism and violence. Although the war has made fewer headlines in recent years, the U.S. has never dropped as many bombs on the country as it did this year. U.S. Air Forces Central Command data shows that coalition aircraft (excluding the Afghan Air Force) dropped 5,213 weapons between the start of the year and the end of September.

Previously, the most munitions were dropped in 2010 – 5,101. That was a busy year for coalition forces with Operation Moshtarak the largest offensive operation of the war up to that point. It was also a deadly year with 711 ISAF troops and 1,271 civilians losing their lives. Towards the end of Obama’s presidency, the number or weapons dropped declined with 947 released in 2015 and 1,337 in 2016. Last August, President Trump announced a new Afghan strategy where more troops would be deployed to the country. Since then, the number of bombs dropped has increased dramatically.

That increase can primarily be attributed to a change in the rules of engagement which allows coalition forces to open fire on the enemy without having to be in close contact with them. The change was orchestrated by Secretary of Defense Jim Mattis who wanted to remove such restrictions in order to use air power to its full potential and defeat the enemy. The change, combined with more air strikes by the Afghan Air Force, has also led to a spike in civilian deaths. In October, the UN announced that civilian casualties in the first nine months of this year are already higher than in any year since it started documented incidents in 2009. 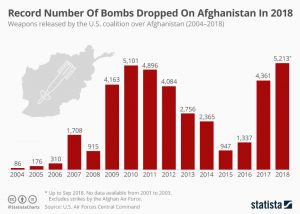