The government services have recorded 72,843 fires, the highest number since 2013

The wildfires in the Amazon rainforest in Brazil have risen 83% so far this year, compared to the same period in 2018.
The government services have recorded 72,843 fires, the highest number since 2013 when records began to be kept. More than 9,500 fires have been detected by satellites since last Thursday alone.

Statistics maintained by the National Institute for Space Research (INPE) based on satellite data show that 74,155 fires were detected across all of Brazil between January 01 and August 20, 2019, an 84 percent increase in 2018. The Amazon accounts for about half of the territory where the fires are burning. Smoke from the fires blotted out the sun in Sao Paulo on Monday, plunging the city into darkness.

Brazilian President Jair Bolsonaro, who has been heavily criticized for his environmental policies, dismissed the data, stating that it is the queimada season, a time in which farmers clear their land with fire. Scientists have stated that deforestation has accelerated since Bolsonaro took office in January. 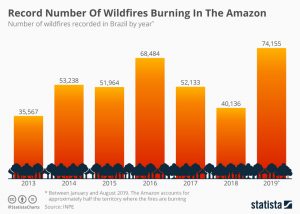