Each fighter will receive $200 a month, which is $20 above the maximum wage currently paid to YPG fighters

The Syrian Kurdish YPG militia aims to expand its force by about two-thirds to more than 100,000 fighters this year, it told Reuters, a plan that would strengthen autonomous Kurdish enclaves that are of deep concern to neighboring Turkey.

The YPG, which is playing a crucial role in the U.S.-backed campaign against Islamic State in Syria, has launched a major drive this year to turn itself into a more organized force resembling an army, spokesman Redur Xelil said.

The militia, which had 60,000 fighters at the end of 2016 – including its all-female affiliate, the YPJ – has already formed 10 new battalions since the start of this year, each comprised of around 300 fighters, he said. 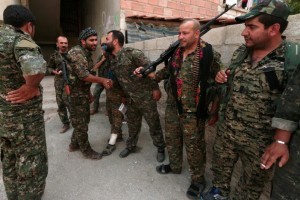 “We aspire to exceed 100,000,” Xelil said in response to written questions from Reuters. Asked how soon the YPG aimed to reach this target, he said: “The second half of 2017.”

The YPG, or People’s Protection Units, effectively serves as the military of the autonomous Kurdish-led regions which emerged in northern Syria with the retreat of state authority in 2011 that accompanied the outbreak of civil war.

The militia is financed by the administrations of those regions. The force and its political affiliate, the PYD, are opposed not only by Turkey but by the Kurdish authorities in neighboring Iraq. Their relationship with the Syrian government, despite historic enmity, is more nuanced, with the sides mostly having avoided conflict in the six-year-old war.

Turkey views the YPG as an extension of the Kurdistan Workers’ Party (PKK), which has fought a three-decade insurgency in Turkey, and as a threat to Turkish security.

The Turkish military launched a military incursion into Syria last year aimed at blocking further expansion of Kurdish control in an area of northern Syria known in Kurdish as Rojava. 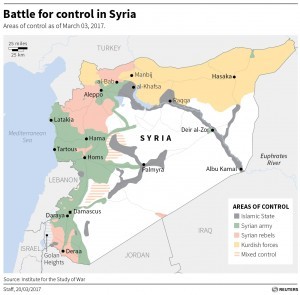 The 10 new units and other new battalions to be formed this year will be trained in all forms of combat, weaponry and tactics, with the aim of turning the YPG into a more organized force that resembles a traditional army, Xelil said.

“A disciplined, cohesive military force, well-trained in different tactics of war … is the true guarantee to defend us and to affirm our presence as a great nation that deserves dignity,” says a YPG leaflet seeking recruits for the new battalions that has been circulated in the predominantly Kurdish regions of Syria, which is home to roughly 2 million Kurds.

Each fighter will receive a monthly salary of $200, which is $20 above the maximum wage currently paid to YPG fighters, Xelil said.

Syrian Kurdish groups established the three autonomous administrations in Kurdish-dominated areas of northern Syria as Syrian state control collapsed in much of the country, setting up their own bureaucracies in addition to security forces.

Officials say their revenue streams include taxes on agricultural produce, and income raised by selling oil from fields in northeastern Syria, though they say only enough is sold to meet local needs.

The YPG is playing a key role in an ongoing U.S.-backed campaign to isolate Islamic State’s base of operations at Raqqa.

YPG commander Sipan Hemo told Reuters last week that the operation to storm Raqqa was due to start in early April, and the YPG would make up a quarter of the force that will take the city alongside allied Arab fighters. The Pentagon said no decision had been taken yet.

Xelil said the new battalions were not taking part in the operation to encircle Raqqa. He declined to say if the new training program was supported by any foreign militaries.

The YPG’s 60,000-strong strength includes the YPJ – the all-female militia that numbers around 24,000, Xelil said. Both male and female fighters are being sought in the recruitment drive.

The dominant Syrian Kurdish groups and their allies aim to deepen their autonomy through the establishment of a new system of federal government in the north. The Kurds, systematically persecuted for years by the Syrian state, say their aim is not independence.

Hemo told Reuters that the YPG aimed to “fight terrorism” everywhere in Syria, while its political priority was “guaranteeing the rights of the Kurdish people in Syria legally, constitutionally”.

He also signaled a readiness on the part of the YPG to reach a long-term accommodation with the Syrian government, saying “there will be no problem with the regime” once Kurdish rights are secured.

Syrian President Bashar al-Assad has stated his opposition to the regional federal model which the dominant Syrian Kurdish groups say should be the solution to the Syrian war. Assad has vowed to take back all of Syria.