Dirk Van Tichelt probably didn’t envision one of the greatest days of his life ending in the hospital. But that’s exactly where the Belgian judoka found himself Monday night hours after winning his first-ever Olympic medal.
Van Tichelt won bronze in the 73-kg judo competition on Monday. Naturally, he went off to Copacabana Beach that night to celebrate the achievement. And that’s where things went awry.
Van Tichelt was reportedly assaulted by a thief on the famous beach, and was struck in the face. He was taken to the hospital after the incident.
The thief, who was reportedly Brazilian, came away with a cellphone, but, crucially, not with a bronze medal. The Belgian Olympic Committee released a statement confirming the details, and saying that Van Tichelt didn’t require treatment at the hospital. He appeared at a media event the next day with a black eye, and, undoubtedly, a smile on his face. 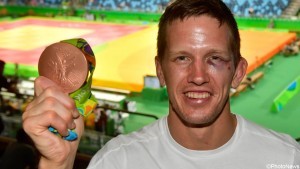