Archaeologists hunting for a sacred well beneath the ancient Maya city of Chichén Itzá on Mexico’s Yucatán Peninsula have accidentally discovered a trove of more than 150 ritual objects—untouched for more than a thousand years—in a series of cave chambers that may hold clues to the rise and fall of the ancient Maya. The discovery of the cave system, known as Balamku or “Jaguar God,” was announced by Mexico’s National Institute of Anthropology and History (INAH) in a press conference held today in Mexico City. 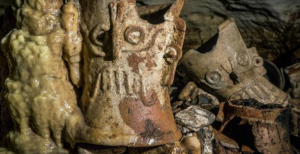 After its initial discovery by farmers in 1966, Balamku was visited by archaeologist Víctor Segovia Pinto, who wrote up a report noting the presence of an extensive amount of archaeological material. But instead of excavating the site, Segovia then directed the farmers to seal up the entrance, and all records of the discovery of the cave seemed to vanish. 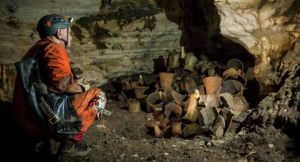 Balamku remained sealed for more than 50 years, until it was reopened in 2018 by National Geographic Explorer Guillermo de Anda and his team of investigators from the Great Maya Aquifer Project during their search for the water table beneath Chichén Itzá. Exploration of the system was funded in part by a grant from the National Geographic Society. 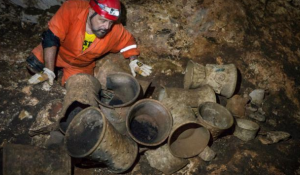 De Anda recalls pulling himself on his stomach through the tight tunnels of Balamku for hours before his headlamp illuminated something entirely unexpected: A cascade of offerings left by the ancient residents of Chichén Itzá, so perfectly preserved and untouched that stalagmites had formed around the incense burners, vases, decorated plates, and other objects in the cavern.
Read more HERE
Tags With: archaeologycavediscoveredhistoryMayamexicomysterious