The hidden artist inside them…

Drawing penises in the sky or on the inside of a bomber cockpit may earn you a stiff punishment in the U.S. military, but phallic graffiti is apparently a tradition as old as warfare.

A cadre of cocksure Roman soldiers deployed in 207 A.D. to repair parts of Hadrian’s Wall—the 73-mile-long stone fortification erected to keep Celtic Britons at bay in the Roman empire’s most northern border — apparently took time to scrawl some, uh, explicit graffiti at a nearby quarry. 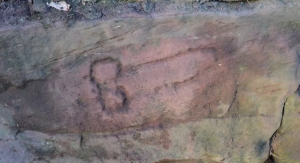 Here are the turgid details, per Smithsonian:

Two shallow relief busts spotted on the rock ledge could represent self-portraits left by the soldiers, or perhaps a mocking caricature of the men’s commanding officer.

A third marking is less open to interpretation.

But the unabashedly phallic symbol isn’t simply a reminder of mankind’s enduring juvenile tendencies: Michael Collins, Historic England’s inspector of ancient monuments for Hadrian’s Wall, tells Cahal Milmo of I News that the Romans generally viewed the phallus as a good luck charm.

Indeed, the Rock of Gelt phallus is just one of many associated with the Roman Empire’s sprawling 73-mile northern border. In an interview with CNN‘s Emily Dixon, Newcastle archaeologist Rob Collins says he has identified 57 other etchings of male genitalia scattered across the length of Hadrian’s Wall.