The glass roof of the Duveen Gallery in London’s British Museum, the room where the Parthenon Sculptures are exhibited, is leaking water following heavy rainfall in the UK capital.

On Friday morning IBNA witnessed the drip of water landing only centimeters away from the statue of Iris, in the area of the gallery where marble figures from the Parthenon’s west pediment are located.

The floor on that spot was covered in absorbing cloth and yellow signs warned about the slippery floor. 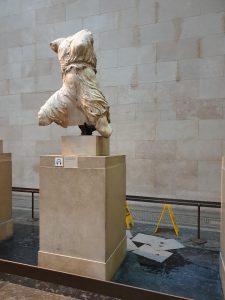 There was no sign of water having landed on the statue of Iris or Amphitrite, also very close by.

Indeed the British Museum have stressed that no water has hit the sculptures and no damage has been sustained, admitting the problem.

In a statement a spokesperson for the Museum said: “There was a minor incident during recent very heavy rainfall when a small amount of water entered the gallery. None of the sculptures was damaged and the issue has been dealt with.”