An analysis was conducted across 40 countries

A new analysis from OpenSignal has examined how the smartphone impacts the mobile network experience. It was conducted across 40 countries between April 1 and June 30, 2019 and it took into account 117 billion measurement on 23 million smartphones. It found that download speed depends heavily on the manufactur and country with the latest models boasting the best network performance. The most interesting aspect of the analysis was the blistering speed of Samsung handsets and they outperformed Apple and Huawei smartphones in 14 of the 40 countries examined. Apple was fastest in seven countries while things were tied in the remaining 19.

For example, Samsung and Huawei users had average download speeds of 55 and 50 Mbps in Canada respectively while Apple users were only managing 31. In Japan, Samsung was the fastest once again with its users seeing average speeds of 46 Mbps. Apple came second with 41 Mbps while Huawei trailed by a significant distance with just 21. One of the most striking findings in the analysis is that Samsung is ahead of Apple in its backyard. In the United States, Samsung phones had download speeds of 28 Mbps on average compared to 20 for Apple devices.

There are several reasons for the differences in network performance and specification is a key one. Just as smartphones differ in areas such as processing power and camera quality, they also differ signficantly in their network communication features, though that is not publicized by manufacturers. The country-wide disparity is caused by other factors. For example, Japan and the U.S. are not strong markets for Huawei, which has resulted in users purchasing cheaper smartphones with less capable modems and therefore slower download speeds. 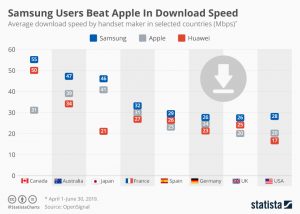