The submarine had surfaced & reported an “electrical breakdown” before disappearing

Hopes that the 44 crew of a missing Argentine submarine might still be alive have been dashed after the navy said an event consistent with an explosion had been detected.

The “abnormal, singular, short, violent, non-nuclear event” was recorded in the south Atlantic by a nuclear test watchdog last week.

Relatives of the missing crew reacted with grief and anger at the news.

It follows a US report of a loud noise in the same area.

The ARA San Juan disappeared last Wednesday. More than a dozen countries including the US, Russia and the UK have sent assistance.

Where is the latest information from?

It was provided to the Argentine navy on Thursday by the Vienna-based Comprehensive Nuclear-Test-Ban Treaty Organization (CTBTO), spokesman Capt Enrique Balbi said.

In a statement, the CTBTO said two of its hydro-acoustic stations had detected a signal from an “underwater impulsive event”. 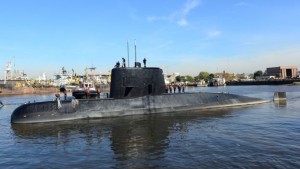 On Wednesday the navy received a US report of a “hydro-acoustic anomaly” detected hours after the submarine went missing.

The navy only knew the location of the suspected explosion, not its cause, he said, and search efforts would be concentrated in the area.

How have relatives reacted?

News of the suspected explosion was broken to family members gathered at the Mar del Plata navy base shortly before Capt Balbi spoke to journalists.

Some remonstrated angrily with the navy spokesman, reports said, while others collapsed in tears.

Relatives accused the navy of lying to them and of raising false hopes. Others pointed the finger at the government, saying lack of investment and corruption in the armed forces had made the submarine unsafe.

Luis Tagliapietra, whose son Damián was on board, told Radio Cut that the navy had told them all the crew had been killed in the explosion at a depth of 200m.

On Wednesday, Capt Balbi said oxygen would be running out on board the vessel.

What was the sub’s last known location?

The ARA San Juan was returning from a routine mission to Ushuaia, near the southern-most tip of South America, when it reported an “electrical breakdown”. 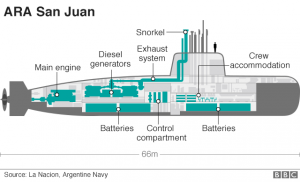 According to naval commander Gabriel Galeazzi, the submarine surfaced and reported the breakdown, which Capt Galeazzi described as a “short circuit” in the sub’s batteries.

The sub was ordered to cut its mission short and return to the naval base in Mar del Plata immediately.

According to Capt Balbi, the captain of the ARA San Juan contacted the naval base once more after reporting the problem. 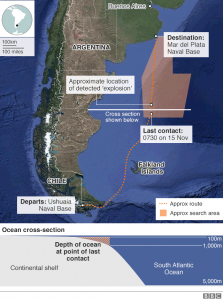 In the message, he reportedly said that the problem had been adequately fixed and that the sub would submerge and proceed towards Mar del Plata.

The last contact was made at 07:30 local time (10:30 GMT) on Wednesday 15 November. It is not known what happened to the sub after that contact.

Argentine navy protocol stipulates that in peace time, submarines make contact twice a day with the base.

When the submarine failed to call in, the Argentine navy began its search. 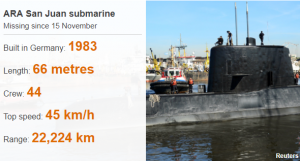 Who is on board?

There are 44 crew on board the submarine, which is under the command of Pedro Martín Fernández.

Forty-three of the crew are men but there is also one woman, Eliana María Krawczyk. The 35-year-old is the first female officer in Argentina to serve on a submarine. 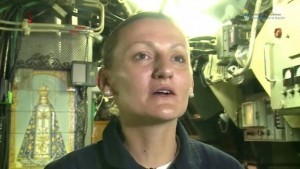 Nicknamed “the queen of the sea” by her father she comes from Oberá, a city in northern Argentina.

Despite having been born and raised far inland, her relatives say that “she was born to be a submariner”, citing her “will of steel” and a passion for her job.

The rest of the crew is made up of submariners of varying ages and experience.

The sub’s engineer, Hernán Rodríguez, has been on the ARA San Juan for 11 years, local media reported.

How could the missing submarine be located?

Brazil, Chile, Colombia, France, Germany, Russia, Peru, South Africa, Uruguay and the UK are among the countries that have sent either ships or planes to help with the search.

The US navy has deployed two underwater vehicles which use sonar to create images of the sea floor.

A Nasa research aircraft has also flown over the search area but failed to spot anything. 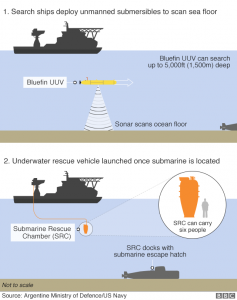 Accidents involving submarines are rare. Here are some of the most serious:

– All 70 crew aboard China’s Great Wall Ming-class submarine suffocated in 2003 when a diesel engine malfunctioned, consuming the vessel’s oxygen supply.
– Russia’s Kursk submarine sank in the Barents Sea in 2000 after a torpedo exploded during an exercise, killing all 118 on board, including 23 who survived the blast but died due to a lack of oxygen.
– The USS Scorpion sank in the Atlantic in 1968, possibly because a torpedo exploded, killing the 99 crew.
– The USS Thresher sank during diving tests in 1963, killing all 129 on board – the biggest submarine death toll in history.