As the family grew bigger and bigger, so did their appetite…

The story of Alexander “Sawney” Bean might be real or a greatly exaggerated legend. However, past stories such as this one, true or not, are more interesting if we believe that they happened. Sawney was a man from Scotland, famous for killing and eating more than 1,000 people somewhere between the 13th and 16th centuries.

Early in his life, Sawney realized that he doesn’t have a taste for honest labor and left his home to get married to an atrocious woman who apparently shared the same “taste” for food. 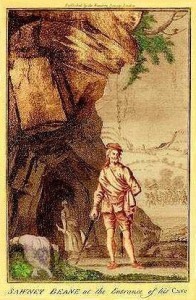 (Sawney Bean at the Entrance of His Cave. Note the woman in the background carrying a dismembered leg)

The couple settled their home at Bennane Cave, by Ballantrae in Ayrshire, Scotland. The entrance of the cave was usually flooded twice a day at high tide. Inside, the cave had many tunnels and passages. The couple remained there for 25 years, together with their 14 children and 22 grandchildren – many of them products of incest.

Since the Beans didn’t know honest work, they robbed strangers in the evenings, killing them and dragging the bodies into the cave where they were dismembered and eaten. Leftovers were pickled, and discarded body parts would sometimes wash up on nearby beaches. The missing people and body parts were of course noticed by the local villagers, but nobody could suppose that murders lived in the nearby cave which entrance was flooded. 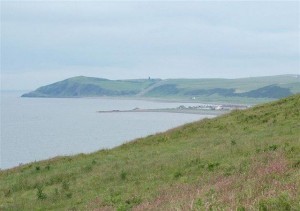 As the family grew bigger and bigger, so did their appetite, and they murdered more and more people. Once, as an elderly couple was returning from a fair, the Bean family attacked them and as they struggled, a group of 20 more people also returning from the fair came by. The Beans managed to mutilate the body of the woman but there were 20 witnesses and a husband who went before the Chief Magistrate of Glasgow.

After hearing what happened it was easy to connect the long list of missing persons and mysterious pickled body parts with the attackers. King James I himself went to Ayrshire with a small army of four hundred men and a pack of tracker dogs, and together with a band of local volunteers, launched one of the biggest manhunts the country had ever seen. What they didn’t expect to see is what they found in the cave with the help of the dogs. 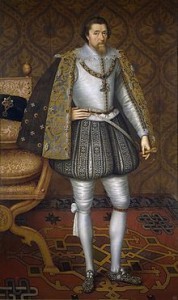 The Bean family fought but couldn’t win against the King’s army, so all the members were arrested and marched off to Edinburgh by the King himself. Even the justice system didn’t have a suitable punishment for the Bean family, so they were all sentenced to death. In the name of justice, the entire family faced the same fate as their victims – their legs and arms were cut off and they were left to slowly bleed to death, watched by their women. The women were burned like witches in huge fires.