No atheists in flight UA328…

A United Airlines Boeing 777-200, which had taken off from Denver Airport in Colorado for a flight to Hawaii, suffered a catastrophic failure in its right engine, parts of which crashed in an area 25 kilometers from the point of departure.

The B777 flight UA328, with 240 passengers and crew, returned and made a safe emergency landing.

Photos posted on social media sites, mostly by Broomfield police, show scattered debris in parks and stadiums, with the most striking being the outer ring of the engine in the backyard of a Denver suburb. 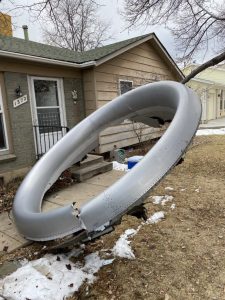 Kerby Clemens, owner of the yard where the piece fell, told CNN that “it landed on the roof of my car before it fell to the side, while another large piece opened a 1.5-meter hole in a neighbor’s roof”.

The Air Force’s secret new fighter jet will come with an R2-D2!

Looking for another Earth? Here are 300 million, maybe

United Airlines confirmed that there were no injuries to passengers and so did Bromfield police, as no ground injuries were reported.

What is amazing and shocking at the same time, though, is the footage from a passenger who recorded the destroyed engine during the flight.