Mr. Schauble says Greek PM Tsipras responsible for set back in first half of 2015

The German Finance Minister, Wolfgang Schuable claims he is not responsible for the hardships of the Greek people, arguing its was the government of Greece that decided to slash pensions and choose the mix of policies for the country’s fiscal adjustment in accordance to the bailout programme it signed on to.

In an interview to Greek newspaper “Ta Nea” entitled “Tsipras doesn’t know me so well”, Mr. Schauble responds to his demonisation by the Greek public saying he understands how it is more convenient to lay the blame on the German Finance Minister in the context of political rhetoric in Greece. “That, of course, is not right, as it deceives citizens who have partially a different view”, Mr. Schauble underlines. The German politician reiterates his view that the Greek debt does not present a problem at this stage, stressing that what is needed is to focus on the reforms and their implementation. “In the future it [debt] might be a problem for Greece. Then it will be examined. “But if we the debate is focused on debt now, which is not a problem for the next few years, then one forgets to do what is necessary, namely to implement the necessary changes for Greece”, he says.

He continues by saying that any talks on a debt restructuring will be looked into after 2018 and if that is necessary. “If the IMF’s negative outlook is vindicated, Greece will have to adopt more measures at the end of the current programme”, he says. Mr. Schauble warned that it was dangerous for the Greek government to push the narrative that it was forced to implement the programme. “Mr. Tsipras had promised to do away with the privileges of the shipowners in his election campaign. The government did not do it for its own reasons. It is a decision of the Greek Government and the parliament to protect the shipowners and make cuts elsewhere”, he claims. 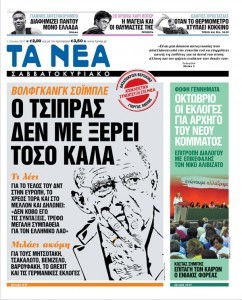 Responding to why  Greece shouldn’t have the same treatment as Germany did after the second world war when a large part of its debt was written off, Mr. Schauble says the situation between Greece and post WW2 Germany are not comparable. “The debt was from the first world war and Germany was under the occupation of four powers”, he says.

The German Finance Minister said he had warmed Mr. Tsipras that his party would not be in a position to uphold its election campaign promises unless the country was kicked out of the Eurozone. “He won the elections in 2015. Greece went through a bitter six-months. That half a year and the damage caused is his responsibility”, Mr. Schauble underlined.