Centuries of contact & exchange left their mark on both Greek & Egyptian culture, culminating in Alexander the Great’s conquest of Egypt

People, goods and ideas began to flow between Egypt and Greece from around 650 BC. After a time of relative isolation, Egypt once more opened itself up to the Mediterranean world. The first Greek, Cypriot and Near Eastern traders arrived and foreign mercenaries enrolled in the pharaoh’s army. At the mouth of the Nile, Thonis-Heracleion flourished as the main entry point into Egypt. Underwater excavations have found a large harbour, numerous ships and anchors, proving this was an international port city. 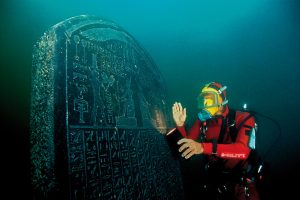 From Thonis-Heracleion, merchandise was distributed to the city of Canopus and inland areas by a network of canals through the fertile Nile Delta. Silver and copper, wine and oil were imported from Greece, Cyprus and the Near East. Egyptian grain and natron (salt), perfumed oil, papyrus and magical amulets were exported across the Mediterranean. 60 miles south of Thonis-Heracleion, traders settled and built temples at its sister port, the Greek-Egyptian trading post of Naukratis. 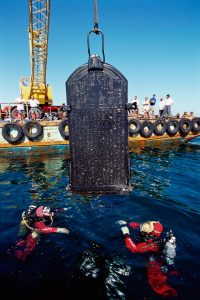 Many foreign mercenaries lived further inland and worshipped Egyptian gods in the ancient capital Memphis. Centuries of contact and exchange, not always free of conflict, left their mark on both Greek and Egyptian culture, culminating in Alexander the Great’s conquest of Egypt in 332 BC. 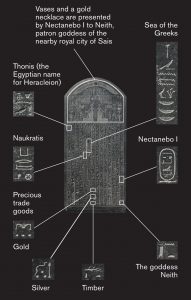 This magnificent monument was crucial to revealing that Thonis (in Egyptian) and Heracleion (in Greek) were in fact the same city. The decree was issued by the pharaoh Nectanebo I, regarding the taxation of goods passing through Thonis and Naukratis. A copy was found in the main Egyptian temple in each port. The inscription states that this slab stood at the mouth of the ‘Sea of the Greeks’ (the Mediterranean) in Thonis.