After a hospital in the United States confirmed that Karius had suffered a concussion in the second half of the final in Kiev when Ramos caught him with a stray elbow, just minutes before he threw the ball straight to Karim Benzema to gift Real their opening goal, the Spaniard has spoken for the first time about his role in it all.

And, predictably, the defender who is renowned for his supposed mastery of football’s “dark arts” protested his innocence.

Instead of offering any sort of apology to Karius, the 32-year-old instead joked that Liverpool would like to blame him if striker Firmino had caught a cold after the game, while also absolving himself of any responsibility for Salah’s dislocated shoulder.

“Bloody hell, they’ve given this a lot of attention, the Salah thing …” said Ramos while on international duty ahead of the World Cup in Russia. 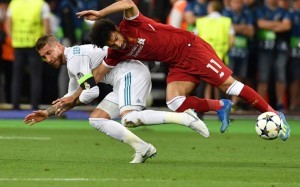 “I didn’t want to speak because everything is magnified. I see the play well, he [Salah] grabs my arm first and I fell to the other side, the injury happened to the other arm and they said that I gave him a judo hold.

“After the goalkeeper said that I dazed him with a clash. I am only missing Firmino saying that he got a cold because a drop of my sweat landed on him.”

Ramos, who could be seen laughing and joking with one of the assistant referees as Salah left the pitch in agony just over a week ago, has apologized to the Egypt international via text message.

“I spoke with Salah through messages [and] he was quite good,” Ramos added. “He could have played if he got an injection for the second half.

“I have done it sometimes but when Ramos does something like this, it sticks a little bit more. I don’t know if it’s because you’re at Madrid for so long and win for so long that people look at it a different way.”