The skeletons were intact, despite previous looting at the site

Five skeletons of women and children who died while trying to shelter have been uncovered in Pompeii, which was devastated by the eruption of Mount Vesuvius in AD 79.

The new skeletons were found in a house which recently yielded an inscription which suggested historians had got the date of the eruption completely wrong. 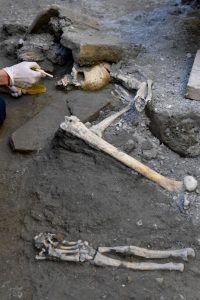 The five skeletons – two women and three children – were found in a small room where they appear to have sought shelter from the blast, which buried the town in ash.

They may have died when the roof collapsed, experts said.

The director of the archaeological site, Massimo Osanna, called it ‘a shocking find, but also very important for history.’ 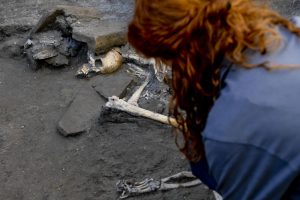 He said that the skeletons were intact, despite previous looting at the site.

The team recently discovered that a worker had inscribed the date of ‘the 16th day before the calends of November’, meaning October 17, on the house. 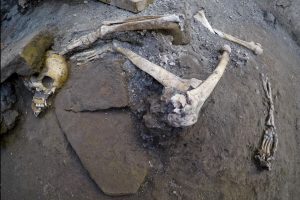 The town had been previously thought to have been destroyed on August 24.