The Oedipal complex, repressed memories, penis envy: His ideas are far-reaching, but few have withstood the onslaught of empirical evidence

Few thinkers are as celebrated as Sigmund Freud, a figure as well-known as Charles Darwin and Albert Einstein. Neurologist and the founder of psychoanalysis, Freud’s ideas didn’t simply shift the paradigms in academia and psychotherapy. They indelibly disseminated into our cultural consciousness. Ideas like transference, repression, the unconscious iceberg, and the superego are ubiquitous in today’s popular discourse.

Despite this renown, Freud’s ideas have proven to be ill-substantiated. Worse, it is now believed that Freud himself may have fabricated many of his results, opportunistically disregarding evidence with the conscious aim of promoting preferred beliefs.

“[Freud] really didn’t test his ideas,” Harold Takooshian, professor of psychology at Fordham University, told ATI. “He was just very persuasive. He said things no one said before, and said them in such a way that people actually moved from their homes to Vienna and study with him.”

Unlike Darwin and Einstein, Freud’s brand of psychology presents the impression of a scientific endeavor but ultimately lack two of vital scientific components: falsification and empirical evidence. 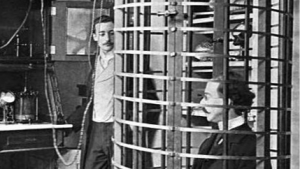 (Freud’s therapeutic approach may be unfounded, but at least it was more humane than other therapies of the day. In 1903, this patient is being treated in “auto-conduction cage” as a part of his electrotherapy)

The discipline of psychotherapy is arguably Freud’s greatest contribution to psychology. In the post-World War II era, psychoanalysis spread through Western academia, influencing not only psychotherapy but even fields such as literary criticism in profound ways.

The aim of psychoanalysis is to treat mental disorders housed in the patient’s psyche. Proponents believe that such conflicts arise between conscious thoughts and unconscious drives and manifest as dreams, blunders, anxiety, depression, or neurosis. To help, therapists attempt to unearth unconscious desires that have been blocked by the mind’s defense mechanisms. By raising repressed emotions and memories to the conscious fore, the therapist can liberate and help the patient heal.