Six French soldiers have been injured when they were run over by a car outside their barracks in Paris this morning.

The vehicle, a BMW, rammed the group as they were leaving their barracks in Levallois-Perret, a northwestern suburb of the French capital, Paris police have said.

Two soldiers are reported to have been seriously injured in the incident, which took place at about 8am local time.

The mayor of Levallois-Perret, Patrick Balkany, said the incident had ‘without any doubt’ been deliberate. 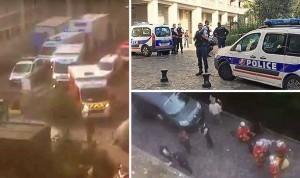 The driver fled the scene and security services are currently looking for them and the vehicle.

The soldiers are part of Opération Sentinelle, an anti-terrorism operation deployed following the 2015 attacks in Paris. 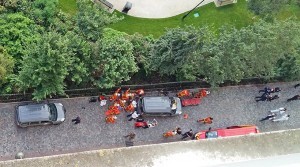 Members of the operation have stepped in on several occasions which have since been linked to acts of terrorism.

This includes the incident in February when an Egyptian man was shot outside the Louvre Museum after attacking and injuring a soldier with a machete.

The suspect later claimed his intention had been to destroy artworks inside the famous museum in ‘an attack on France’.